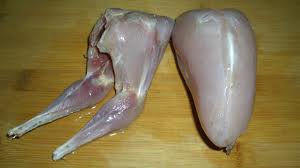 Grouse In Spicy Sauce
By Hookemharry

One eight ounce can tomato sauce

Put olive oil in a large stock pot and add the grouse. Salt and pepper to taste and remove from pot when birds are browned. Now add the sausage and brown and then remove from pot. In the same pot add the onion, bell pepper and celery and cook for five minutes. Add the grouse sausage and the rest of the ingredients except for the rice. Bring to a boil and reduce to a simmer and cook covered for one hour. While it cooks check to be sure there is enough liquid and add broth or water if needed. Stir occasionally to prevent sticking to pot. When done put a portion of rice on each plate and cover with grouse mixture. There is plenty for seconds and folks do ask for seconds.