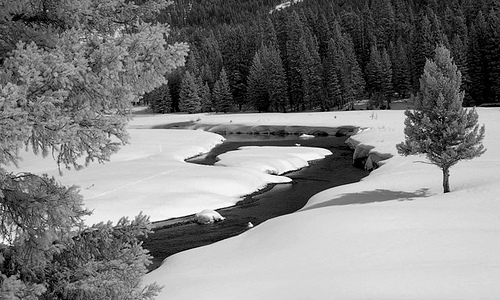 Last fall someone predicted that this winter in Montana would be wet and cold. I can’t recall if it was the Farmer’s Almanac or some other source and it really doesn’t matter at this point. Whomever I heard it from the prediction so far has been correct. It has been cold and most of the state has been experiencing above average moisture since late last year. Most of the river basins in the state are 100 percent snowpack or more. It is good news for the reservoirs around the state; however some of the state might be experiencing flooding this spring when the snow begins to melt. In fact the folks up in Glasgow had a public flood preparation meeting yesterday to start planning for possible spring flood conditions in that area of Montana. The excess snow on the ice in that area has also been the main culprit for the cancellation of an ice derby that was scheduled later this month.

The latest fishing report from Adam Strainer and Troy Humphrey from Montana Fish Wildlife and Parks for the Helena area lakes has an ice warning that states “Ice thickness can range from thick enough to support a vehicle to open water’. That pretty much says it all. In that report they say that on Canyon Ferry Reservoir the rainbow fishing continues to be good between the Silos and Pond Four. The best bite has been early in the morning, but anglers are picking up a few throughout the day. Anglers are targeting 2-10 feet of water. Perch fishing on Canyon Ferry remains inconsistent, but anglers continue to pick up a few along the pressure ridge between Hole-in –the-Wall and Duck Creek. Successful anglers are using Hali jigs, Swedish pimples and glow hooks tipped with worms or maggots. The best perch bite has been in 30-40 feet of water. A few walleye and ling have been reported. Ice conditions are 18-20 inches at Pond Four and the Silos. 15-16 inches at Hole-in-the-Wall and Duck Creek. 12-14 inches at White Earth and 6-8 inches at Shannon. Look for some open water at Magpie Bay, Hellgate Bay and near the dam.

Hauser the rainbow trout action is good at the Causeway both through the ice and open water. Ice anglers are catching rainbows on jigs tipped with a maggot while bait of choice for open water is spawn sacks. Ice at the Causeway is up to 6 inches deep, however, it can be quite variable in spots.

Holter is also reporting some good trout fishing near the Holter lake ramp and Log Gulch in 12-15 feet of water. The ice thickness is about 6-8 inches in those areas on Holter Reservoir.

The Helena Valley Regulating Reservoir has seen the kokanee fishing improving steadily over the past week. Anglers are using jigs and corn in 20-25 feet of water. There is 13-15 inches of ice.

Georgetown Lake is also starting to produce some kokanee salmon. The ice thickness is good at Georgetown.