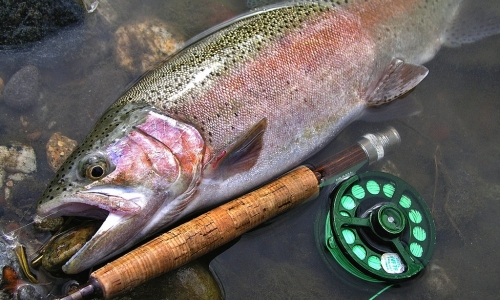 It is getting to the time in July when anglers will want to know if the whitefish are going to bite on Flathead Lake. The whitefish bite is a favorite among a lot of anglers in Montana; unfortunately it has not been good for two years now. The lake whitefish depends in Flathead Lake depends a lot on what kind of a spring spawn the yellow perch had in April and May. Jim Vashro Fish Biologist for Region 1 in Kalispell recently explained how the perch spawn affects the whitefish bite in an e-mail. “The crystal ball is looking a little cloudy for predicting summer white fishing. We had some big storms in April that would have been tough on perch eggs. But spring was so cold it looks like perch spawning was delayed and there were good perch catches into May when the weather wasn’t too bad. So, if there was significant late perch spawning in early May the hatch could have been okay. But the rest of the story is the continued cold spring and the high, muddy runoff. Those two factors probably combined to delay the hatching and growth of zooplankton the young perch feed on. There is a good possibility even if there was a good perch hatch the young fish starved to death. None of the fisheries agencies do any larval perch sampling. I think we will all have to wait to see if the perch/whitefish show up. Because it’s been so cold all the cycles seem to be delayed so that may not happen until late July this year.” As my late friend Mark Henckel used to say it is as “Clear as Mud” whether the whitefish bite will happen or not.

The Great Montana Mack Attack will happen this year on Flathead Lake. This year the derby headquarters will not be at Dels Bar. Dates of this year’s tournament will be August 6 and 7th. Tournament organizer Gene Fincher says the new site will be Woll Family Farm located at 3707 Lower Valley Road in Sommers. “We will have a lot of room for plenty of campers”, added Fincher, “the new headquarters will be easy to find as we will have signs up directing all the folks where to go”. For more information on The Great Montana Mack Attack and where to buy your $25 entry ticket call Fincher at 406-261-6445.

A lot more folks in Western Montana are traveling east to fish Fort Peck Reservoir. The higher water that the lake has experienced the past few years is starting to pay big dividends for fisherman. Walleye, northern pike and smallmouth bass fishing has been excellent. The marinas are finally getting back to offering full services after a tough spring that saw record high water elevation on Fort Peck. Crooked Crook located on the west end of the lake is now fishing well and you can launch your boat. For available services there call Bob at the Bait Shop in Winnett 406-429-2086. Hell Creek Marina 406-557-2345 is also open with full services and Rock Creek Marina 406-485-2560 on the Dry Arm of Fort Peck is also back to offering gas and about half their RV sites are available for campers.