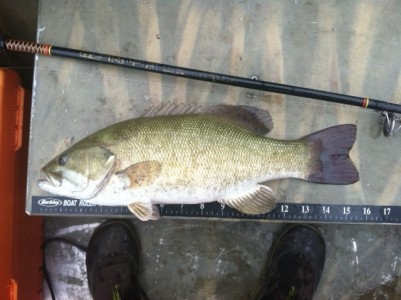 Captain spent Thursday on the Flathead River and here is his fishing report below:

It was a beautiful morning as I made my way to the Flathead River below Perma. It had been a while since I had fished the Flathead mainly because the water has been so high until recently.

As I arrived at the boat launch I could see I was the first angler to launch. The air temperature was 51 at 7:15am and the surface water temperature was 71 degrees. The river is still running higher than normal for this time of the year.

After launching my boat I headed to my first smallmouth bass hole. It wasn’t long before I hooked into what was to be my biggest bass of the day (16 inches). I took a picture and caught a slightly smaller bass (13 inches). That did it for the bigger bass.

I ended up heading down river and managed to hook 6 more smaller bass but it took the better part of the morning to do it. I had most of my luck on a set-up that included a three way swivel with a bell sinker hanging off one swivel and a single hook with a green bead that I tipped with a nightcrawler on off the other swivel. I also tried tube jigs with limited success and also tried casting swim baits into the weed line with no success. I also trolled the j13 orange/gold rapala for northen pike with no success.

The bass picture are the fish that I caught and released at the beginning of the day. 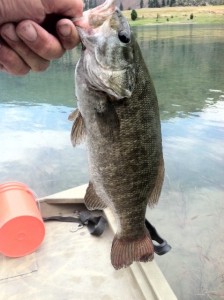