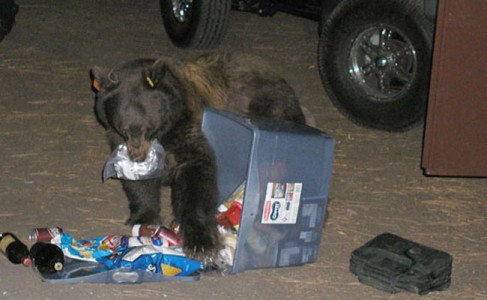 The campground at Russell Gates Fishing Access Site, along the Blackfoot River, is now open. The temporary closure was lifted after FWP officials captured and euthanized a cinnamon colored black bear that entered a tent and ate food off a picnic table early Wednesday morning.

According to FWP bear management specialist, Jamie Jonkel, the bear was a 3 to 4 year-old female, weighing about 150 pounds without young. (Note: The bear in the picture above is not the one that was killed.)

“This bear had received food rewards in the past and learned that humans posed no threat, which made this a dangerous situation,” said Jonkel. “There are a lot of berries in this area, which means there will be more bears, and we really need people to keep their foods contained.”

Also in Wolf Point, MT, Bridge Park (the concrete boat ramp at the Lewis & Clark Fishing Access Site, on the Missouri River) is open again for public use.  The ramp was replaced after it was severely damaged by the high water levels last year.

The ramp had been partially closed since July 21, but now the entire site is open for public use.