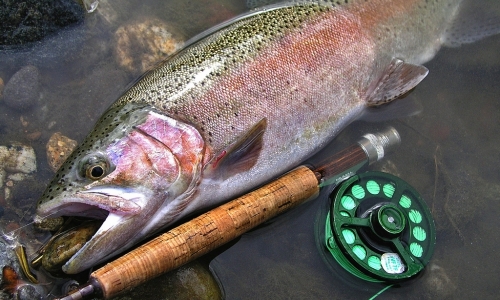 As the 2012 Fall Mack Days fishing tournament comes to a close on November 11th, the seventh week of the contest on Flathead Lake proved to be full of fish-reeling fun!

See their report below:

2012 Fall Mack Days is in its final days and lake trout anglers are reeling in the fish.  Total entries in the event are at 11,940.  The seventh weekend total was 2,672 which is just 9 shy of the best 3 day weekend in 2011.  Anglers turned in 1,029 lake trout entries on Friday, 928 Saturday, and 715 on Sunday.  The typical fall weather in Montana threw a little bit of everything at the anglers-but most of the hours out on the lake were good ones for the anglers.  Temperatures were mild with a few rain showers and slight breezes off and on throughout the weekend.

A sincere thank you goes to the Confederated Salish and Kootenai Tribes for sponsoring this important event and to Montana Fish, Wildlife, and Parks for sanctioning it.  The fishing events are used as a management tool to slowly reduce numbers of non-native lake trout in Flathead Lake and increase the numbers of native fish-westslope cutthroat trout and bull trout.

The success of the events goes to the anglers who are very dedicated and who spend hours and hours out on the water.  They pay out the money for the fishing equipment and gear it takes to compete. It is their boats and gas used out on the water.   The rewards they get in prizes and drawings are earned by each and every one of them.  They are part of making a difference for future generations of anglers who may someday have the chance to fish for native fish in Flathead Lake again.

The Fall Event will end on Sunday-November 11th with a fish fry at the Blue Bay boathouse for friends and families of the anglers.  The fish fry will begin at 4:00 and the awards will begin at 5:00.  Bring your lawn chairs and enjoy the time with the anglers.  Sunday is a separate day and has prizes only for that day.  Totals do count for bonus amounts but not for average points in the top angler contest.  All lake trout entries are to be turned in by 4:00 at Blue Bay.  There are no fish pickups on that day in Big Arm,  Polson, Wayfarers,  or Somers.

Garett Vaughan-Charlo is first in the 12 & under division with 39 and Mark Herzog of Missoula has 20.  Eric Sams continues to lead the 13-17 group with 36.