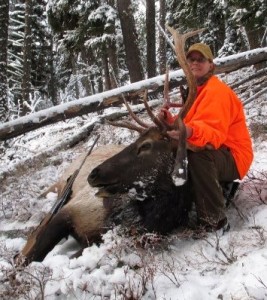 Coral Maxwell, of Darby, Montana, was quoted saying “champions never quit” the day before she shot a non-typical 5×6 bull elk.

It was Black Friday, and Coral and her hunting group had spent countless days hiking and hunting without seeing much for tracks of any animals.

This particular morning, Coral’s “famous last words”, before her successful kill, were “if we don’t see elk today, then they are invisible”.  A drive up the road before taking off on foot revealed the tracks of at least 14 elk headed up to where Coral’s group started their daily hunt for the elusive bull elk that were so abundant decades ago. 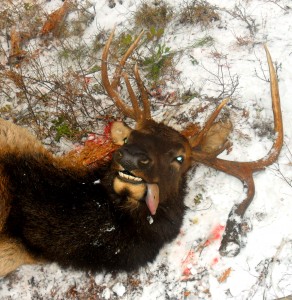 Within approximately one hour of beginning her trek, a gunshot echoed throughout the group’s hunting area, and everybody knew that somebody in the group got a shot at a bull.

Sure enough, Coral was the successful elk hunter on this particular day.

This non-typical beauty’s right antler boasts a club-like drop tine including a main beam that curves severely inward with 5 points.  His other antler is a typical 6 point.

The FWP volunteers at the game check station just outside of Darby aged him at approximately 4 1/2 years-old and said he had been the oldest and biggest bull to come out of the area he was shot in.

Congratulations to Coral for her Black Friday bull!  She may not have gone shopping that day, but she did find an AMAZING deal on a once-in-a-lifetime bull! 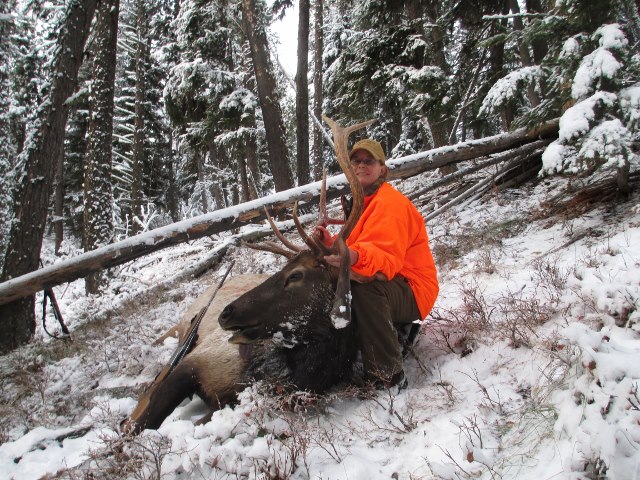