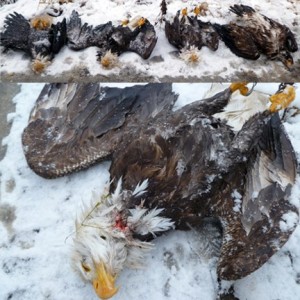 (above photo courtesy of Washington Department of Fish & Wildlife Police)

Bald eagles are protected under state and federal law, and it is a Class A misdemeanor if a person kills one.  On top of the federal law, the Washington state law also deems killing bald eagles illegal and brings a maximum penalty of $1,000 and 90 days in jail.  The state also adds a $2,000 fine per eagle, upon conviction.

According to a post on the Washington Department of Fish and Wildlife, on January 10th, officers retrieved four dead eagles floating in a lake just outside of Granite Falls, Washington.  The post states that “Initial observations suggest at least three of the birds were killed using a small caliber rifle.”

The Washington Department of Fish and Wildlife is asking for your help in catching the poachers.  They have teamed up with the Humane Society of the United States and Conservation Northwest to offer a $3,750 cash reward for information that leads to the arrest  and conviction of the poacher.