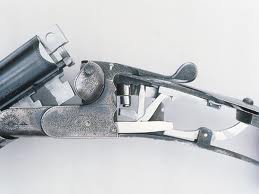 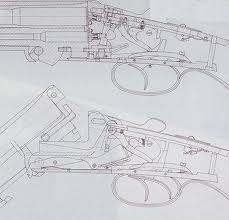 This week, as we continue our shotgun review, we’ll take a peek at boxlock actions.

The boxlock action is a type of hammerless (read internal hammer) design that is commonly used in not only SxS, but also O/U shotguns. The boxlock design was developed by two Westley-Richards company gunsmiths, William Anson and John Deeley, in about 1875, and in 1882 a trigger block safety was incorporated into the design. Boxlock actions have become the dominate action in the hinged or break open shotgun market. Unlike the sidelock, all the lockwork and fire control mechanisms of a boxlock are contained in the boxlike receiver or on the rear of it. Some have false side plates that cover the rear lockwork and look like those of a sidelock, but serve only as a cover and a greater area for the engraver. Most of the time, the lockwork is covered by the butt stock. Because less wood is removed from the stock, it remains stronger that the stocks of a sidelock.

Modern boxlock shotguns can be purchased for as little as 400 to 500 dollars. My anecdotal experience with these guns has been mixed. I’ve seen some that are very reliable and others that didn’t last for more than 100 rounds. Most of the SxS guns available in the USA are imported. A few specialty manufacturers make guns domestically, the most notable being Connecticut Shotgun Manufacturing. CSM guns start around $4000.00 and go up from there. The same can be said for the better quality imports. There are some fairly good buys on the used gun market, but as always BUYER BEWARE! 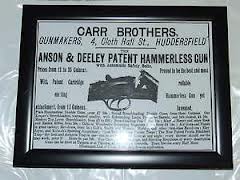 A quality boxlock SxS is a joy to shoot and can transport its owner back to a time when “shooting flying” was the sport of gentlemen.

This weekend I’m in Eugene, Oregon for a couple of NRA Pistol Instructor courses. Lots of study, but also lots of fun. I’ll keep you informed on the outcome.