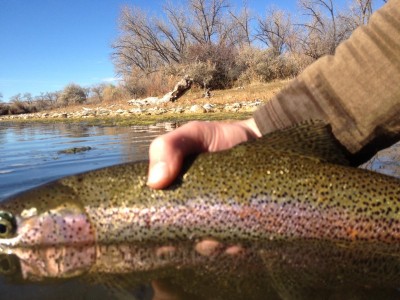 Bozeman/Butte Recreation Report by Bob Ward and Sons – 3.22.13
By angelamontana

(Above photo courtesy of bozemanangler.com)

Hello, Angie here, from Bob Ward & Sons, with the goods on what you can expect on the rivers & lakes around BUTTE & BOZEMAN:

Bozeman area fish are high-maintenance in this goofy weather, & have to be treated with a touch of INDULGENCE right now…indulge them on the UPPER MADISON with Egg Patterns & Worms, or get into a bit of Streamer action with a gnarly Brown Bugger or an Olive Fathead & a very slow retrieve.  On the LOWER MADDY, Nymphing has been good with Crayfish, Baetis, Worms & Midges. Not much dry fly fishing at the moment—with all the wind! Cloudy weather in the forecast this week could make for good dry fly action however, IF the wind dies down.  On the YELLOWSTONE, look to calmer days, and fish rising to Midges in the eddy water. Nymphing is best with Stonefly, Midge, Egg & Attractor Nymph patterns. Black Streamer patterns have been catching their share of fish as well!  On the GALLATIN RIVER, a local source told us, & I quote, “ the Pheasant Tail Beadhead Nymph was really catching their attention”.  The GALLATIN’s clear & ready for you to fish, Valley or Canyon!

If you’re wise, you’ll get to the SKI slopes while you still can.  BRIDGER BOWL boasts a 66 inch base depth, & surface conditions of packed powder on machine groomed, while BIG SKY has a base of 54 inches with four to six inches of new snow in the last 24 hours. MOONLIGHT is sitting on 59 inches with 1-2 new inches of snow in the last 24 hours, is skiing a little rough, but is there a more exhilarating view than atop the Mountain??  ENJOY.

BUTTE area anglers have noted that this past week, muddy water and higher river levels kept all but the most diehard of the fisherman away from the JEFFERSON RIVER around Waterloo.  The BIG HOLE has been good fishing when ice flows subside. The Upper End of the BIG HOLE (above the Wise River) still has lots of ice…however, the Divide Canyon area has been fairly clear. Panther Martins and Mepps Spinners have proven to be a good choice. Beadheads and San Juan Worms for the fly anglers, will net you some decent fish!  ROCK CREEK above “P” Berg has been giving up some nice cutthroat and a few brookies, & GEORGETOWN LAKE produced some nice 12” to 14” brook trout, to anglers using Corn and Swedish Pimples. Delmo Reservoir is getting more than its fair share of  high winds and cold temperatures, and for the time being, kept most fisherman away.

DISCOVERY BASIN received 3 more inches of snow on Monday night to give them a total of 35” at the base and 56” at the top, so strap on your board (or boards) & go!  Get to it while the white stuff is still falling….Spring is just around the corner, even on the mountain tops!

Get on in & visit us in the store for some peeks at the new Spring gear…it’s in and all around the store, so beat the rush & take us up on spring deals!  We’ll show you new rods, reels, rafts & other craft, & all the lures & flies you’s ever want to see. Bob Wards makes every outdoor adventure just THAT MUCH better, so stop by, hit us up for the latest fishing reports—and stay tuned right here for more enthusiastic information from me, next week, neighbors!