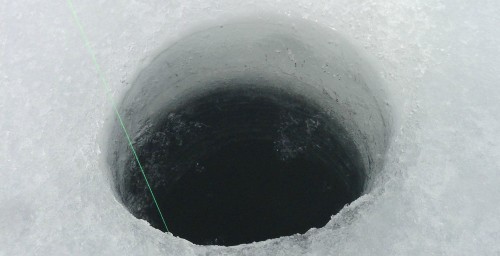 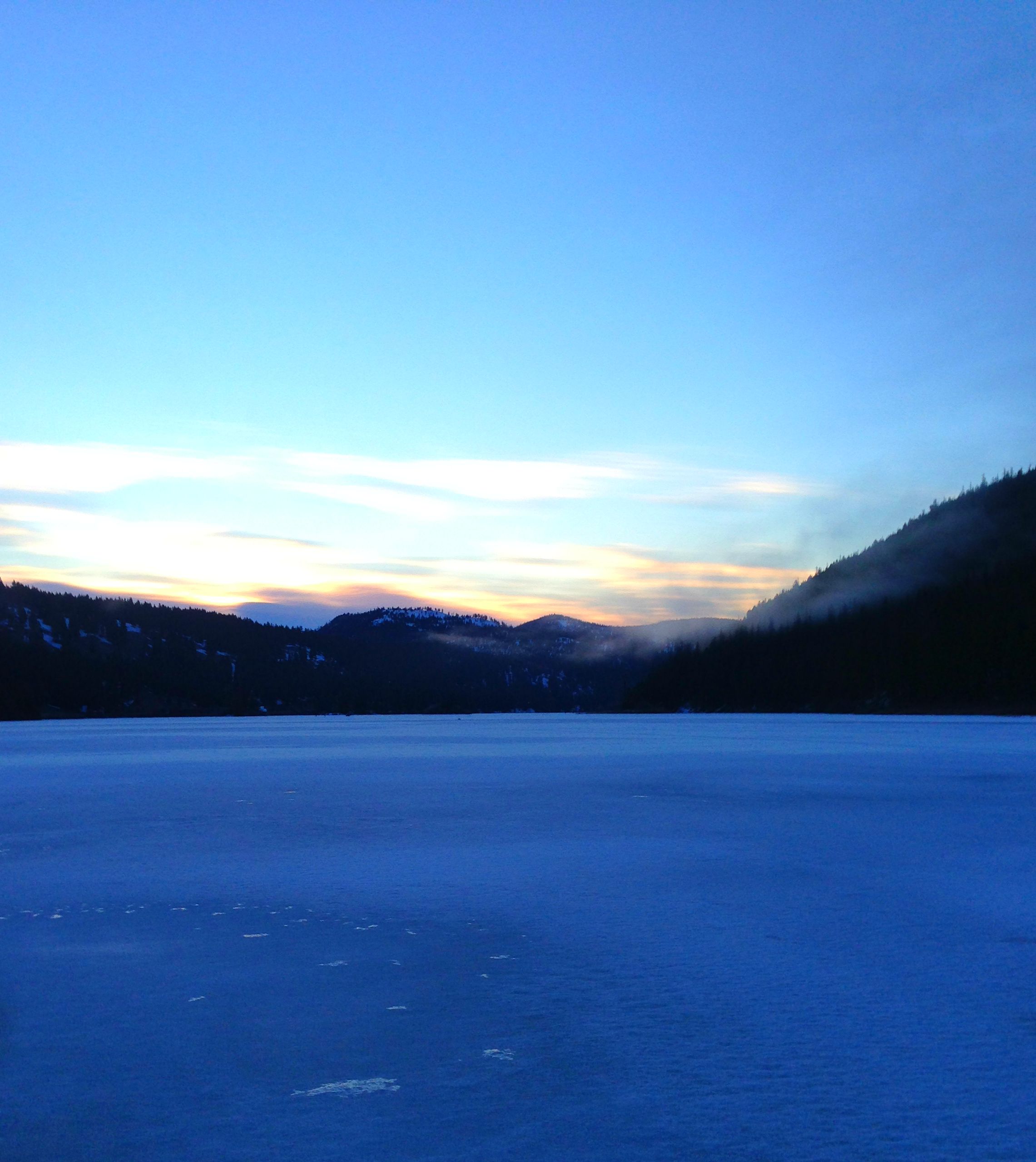 We had success on the ice this weekend at Salmon Lake and Harpers Lake!  Well, I suppose that depends on how YOU define success.  A group of us left Missoula at 5:45am to start our morning on Salmon Lake, trying to catch some pike. 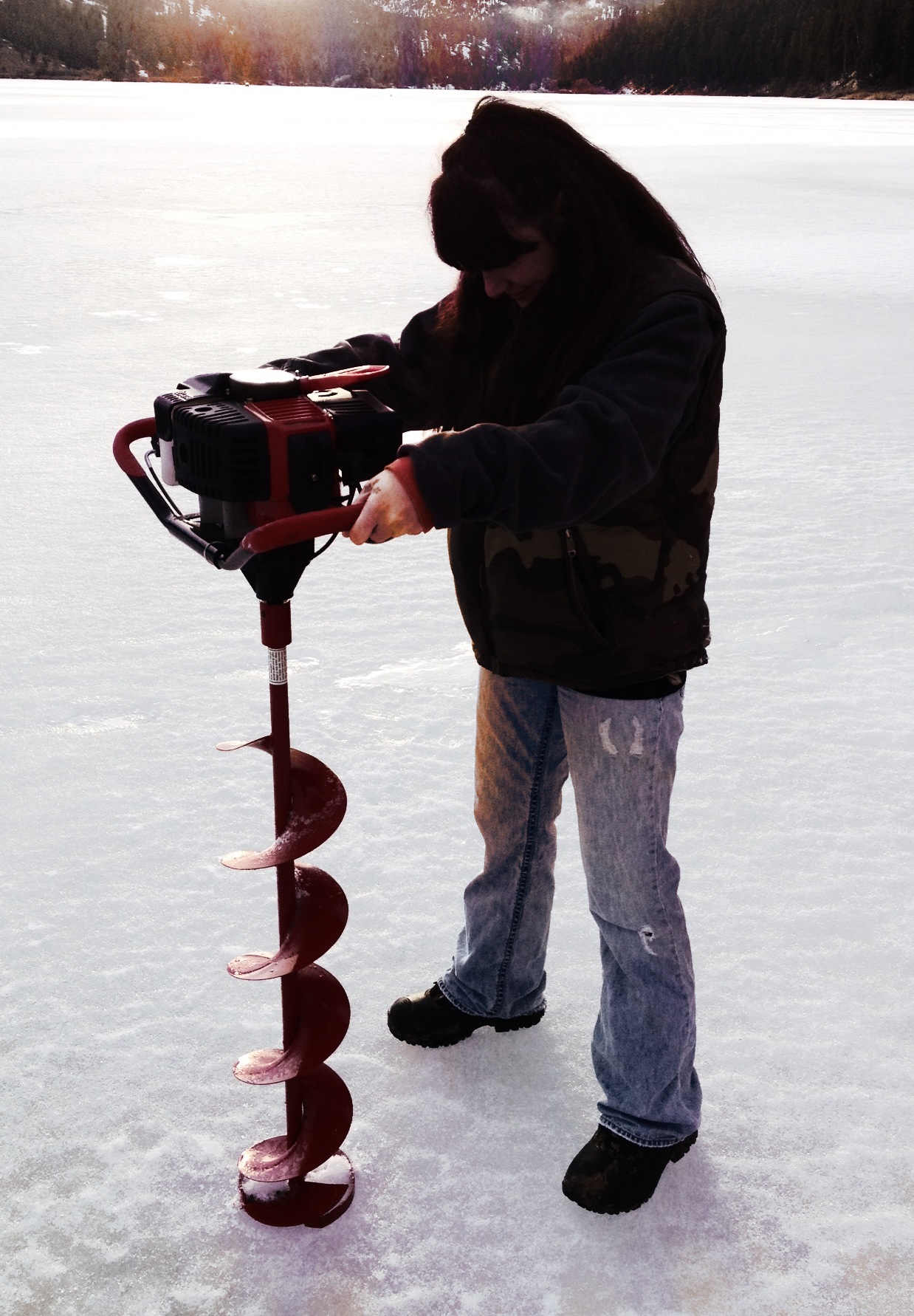 The sunrise was beautiful, and although it was a bit chilly, things seemed promising for us.  The ice was somewhere around 16 inches thick, and I actually got to use a motorized auger for the first time.  I immediately realized how very little I want a manual auger now, as I have been talking about buying for quite some time now–even though they are more affordable.  It will be worth the extra cash to have a motorized auger doing the same work in a fraction of the time–especially with that thicker ice.  It was like night and day!We were hoping the pike hadn’t eaten breakfast yet, so we put smelt on the hooks at the end of our lines, dropped them in the water and waited.  We had two tip-ups and three poles set up around our area.  It was just a matter of time.  While we were waiting, the clouds covered the sun, taking the warmth from the sun away from us.  So, we decided to focus on setting up the hut. 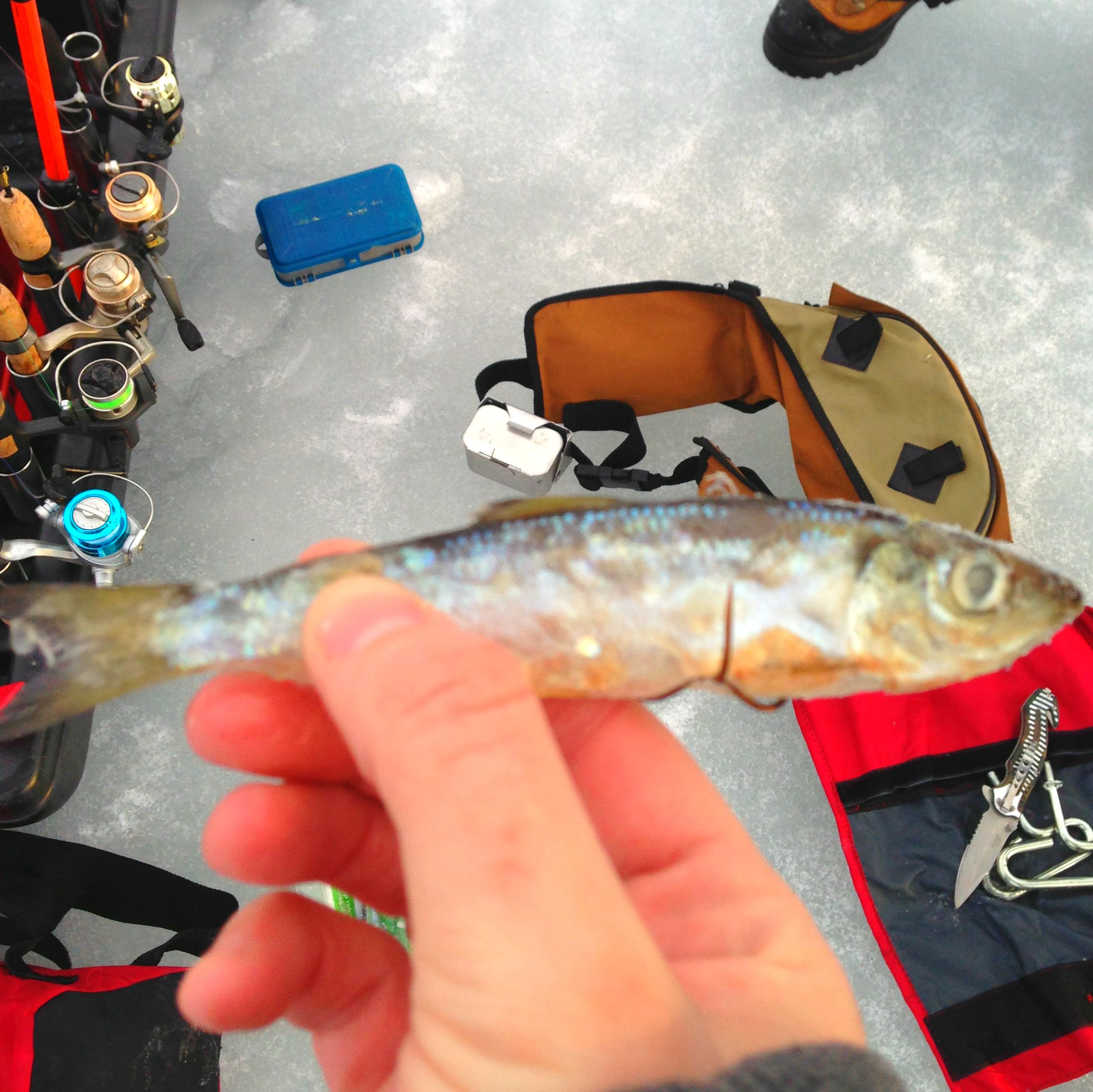 I was hoping that the hook that I baited would bring all the fish to us…well–it didn’t ..lol

What was supposed to be a one-man operation, ended up being a 20-minute, four person operation–well, technically three-person, as I ended up, at some point, stepping back and just took pictures of the chaos.  Eventually, after shattering the poles in two different places, the hut was standing up and the heater was going.  We also tried to see if we could see any fish from a hole inside the hut, but the water was too murky.

We did have something bite the line of one of our tip-ups, but it must not have gotten a hold of the hook, as there was nothing on the line.  So, we put the line back in and waited some more. 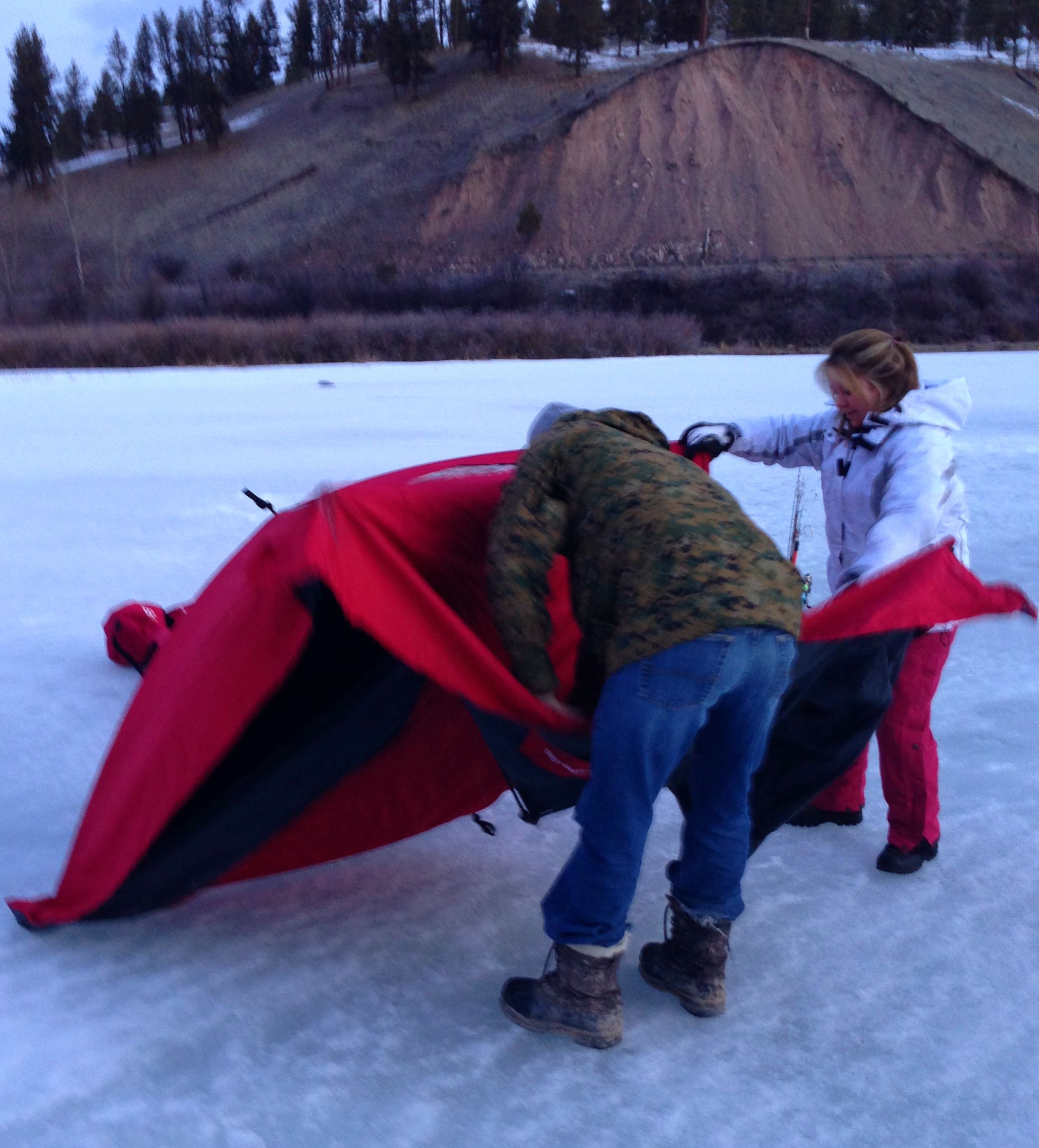 Why is setting up a pop-up hut difficult? lol

After approximately 2 and half hours of pike fishing, without catching any, we ended up packing up our stuff and decided to try trout fishing at Harpers Lake.  On our way back to the trucks, we passed a couple of fishermen and watched as one got a bite on his line and pulled up a perch.  Go figure. 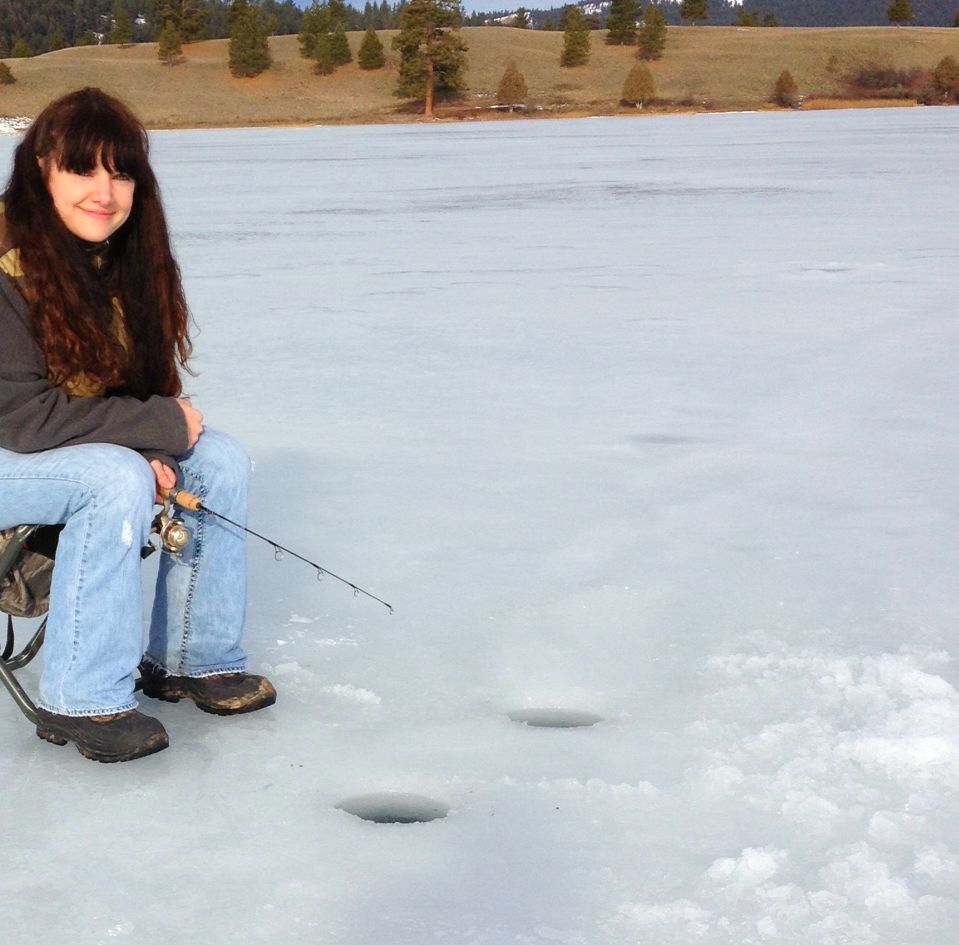 At Harpers Lake, the ice was considerably thinner, being somewhere around 6-8 inches or so.  This spot was our money spot–we weren’t going home without fish.  We got our holes drilled, and we baited our lines with earthworms and started jigging.  This water was much more clear than Salmon Lake’s water, so it was “cool” (pardon the pun) to be able to see as far as we could see.

One of the people in our group caught something, but it got away before the line was taken out of the water.  We drilled at least 20 holes on that frozen lake, and none of us got any bites after the one that got away.  A buddy of ours also showed up, and he was checking out the fish situation with his fish finder, but it wasn’t too promising.  I don’t believe he ended up catching more than “rays” (his words) that day. 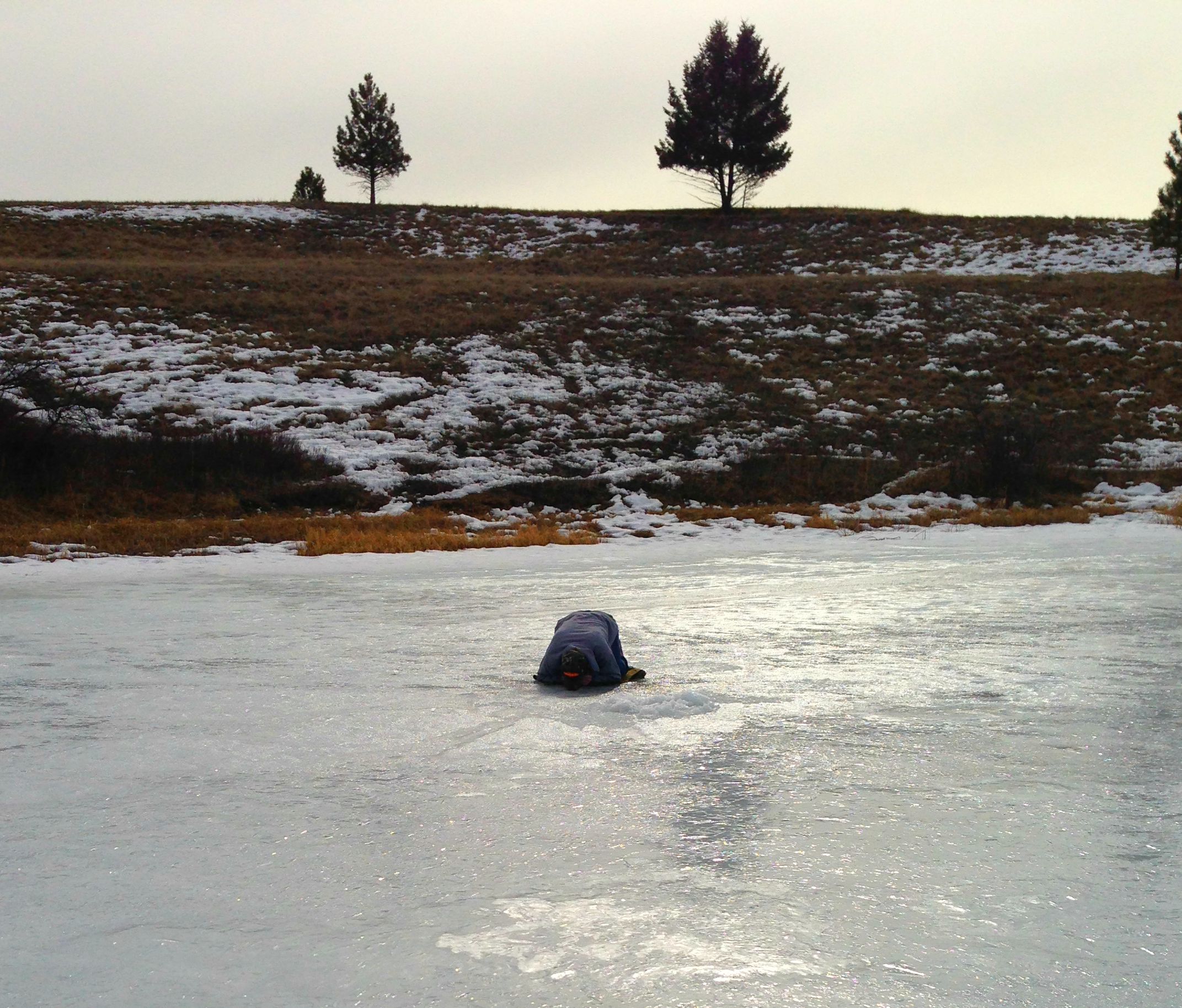 Eventually, our bellies started grumbling for food.  Two bites, but no fish after hours of being out there.  We decided to abort our plan of not going home until we got fish and packed up our stuff to grab some grub.

Even though we didn’t end up catching anything, I still considered Saturday a success, and I can’t wait to get back out on the ice.  Rumor has it that the experience of ice fishing is completely different when you actually catch fish, but I wouldn’t know anything about that….YET…(ha!)

I’m definitely counting the days until I get back out there!