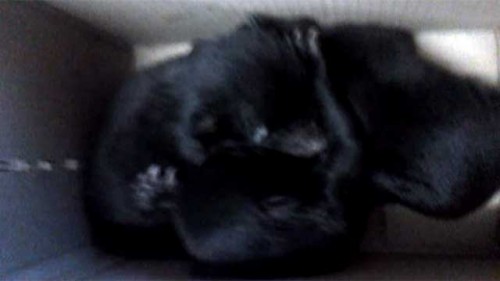 According to Yahoo News

Volunteer firefighter, Brandon Poole, made an interesting discovery while driving with his family in Westminster, South Carolina. As reported by WHNS Fox Carolina, Poole noticed a cardboard box on the side of Damascus Church road and thought it may contain puppies. But as he approached he heard squealing and thought it could be baby pigs.   Once he looked inside, he was surprised to find three bear cubs.  Protecting the cubs from the freezing temperatures, Poole brought them back to his fire station and called the state’s Department of Natural Resources (DNR).

DNR examined the young bears but were unable to find their mother when they received the rescue call.  So two of the cubs were sent to the Appalachian Bear Rescue (ABR) in Townsend, Tennessee, and one was sent to Charles Towne Landing state park in Charleston, South Carolina, where they will stay until they’re ready to be returned to the wild