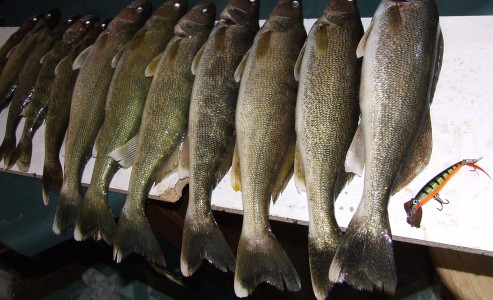 On Saturday, April 20th, the Jordan Chapter of Walleyes Unlimited hosted its Annual Tough Guy Walleye Tournament. Thirty-four teams braved the possibility of inclement weather only to be treated to a 50 degree-day with light winds and excellent fishing.

Eleven of the 34 teams had 5 fish limits. Overall, fishing would be considered to have been excellent with one team reporting catching 26 fish during the day. Length of the fish was generally in the 18” range which should bode well for the upcoming walleye season. The largest walleye of the event was caught by the Circle team of Chris Kwasney and Kane Mury at 30.50”.

The vast majority of the fish were males, which were ripe, indicating that the spawn is in full swing. Fish were reported to have been caught from all areas of the lake ranging from Timber Creek to Crooked Creek east of Hell Creek.

Large northern of the event was caught by the Miles City team of Taylor Kennedy and Tyler Trogden at 42.50”. There were reports of a 19” smallmouth being caught.

Water temps in the Hell Creek and Southerland regions were at 40 degrees.