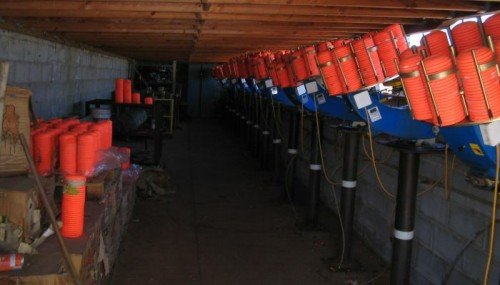 About a dozen years ago, my friend Jim Clawson introduced me to the International or Olympic style trap game. Sadly, we lost Jim last December; I will always be grateful to him for teaching me about his favorite game. 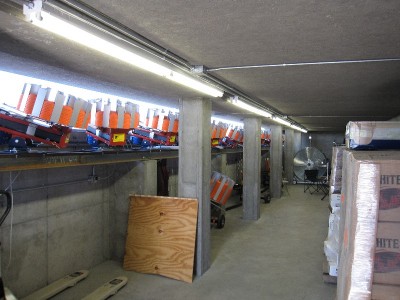 The International game is commonly referred to as “bunker” because of the layout of the field. As you can see from the photos in this post, the trap house looks just like a bunker.
Like ATA style trap there are 5 posts or shooting stations in the bunker game. However, for each post, there are 3 trap machines for a total of 15 trap machines per field. Each shooter will attempt to break 5 targets/ post for a total of 25, just like the ATA game. The shooting stations are 15 meters or about 16 yards behind the traps. That is about where the similarities stop. 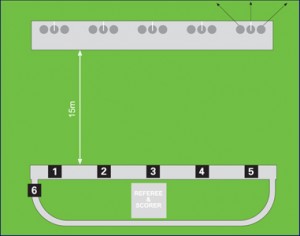 Rather than staying at each post for 5 consecutive targets, shooters in the bunker game rotate to their right after each shot. In addition, there are 6 shooters per squad. At the beginning of the round shooter number 6 stands to the left of shooter number 1. As the shooters rotate right, shooter number 6 enters the rotation at station 1. When the post 5 shooter has fired at the target, that shooter then circles back around to his left towards post 1. This rotation continues 5 times with shooter number 6 finishing on post 5. While it sounds a little complicated, it really is a simple process.

Bunker targets are similar (110mm diameter) to ATA targets (108 mm diameter) or about 4 ½ inches; but bunker targets are flatter and designed to be harder to break. The targets are thrown much faster 65MPH vs. 40MPH and the angles are greater, up to 45 degrees off center each way. Bunker targets are also thrown at heights between 1.5 and 3.5 meters (~11 ½ feet) making the “surprise” factor extreme. There are 2 right and 2 left angle targets, and 1 straight-away target per post. While 12 gauge shotguns are allowed, shooters are limited to 24.5 grams (~7/8 ounce) of shot. Muzzle velocities are fairly high at 1325 fps. 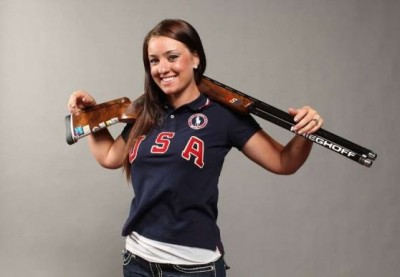 Most bunker competitors use O/Us. Shooters are allowed 2 shots at each target with the second shot being taken when the first is missed.
Bunker trap has been described as the most challenging of the clay target games. Believe me, those little orange devils are real screamers. The sheer speed at which the targets create distance from the shooter after leaving the trap has buckled the knees of more than one trap shooter. This game is really a strong challenge for any shotgunner. If you ever get the chance, certainly give it a try.