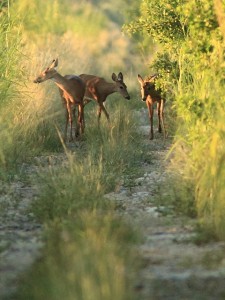 BOZEMAN—On July 3, 2013, Gallatin County Justice Court sentenced Kenneth Welch of Belgrade for several hunting related offenses which occurred during last year’s general season. Welch lost his hunting privileges for six years, was ordered to turn over his .22 rifle to the state and pay $3,270 in fines (including $990 in restitution).

On November 18, 2012, witnesses reported seeing someone spotlighting in the area of Nelson Road and Spain Bridge Road. Gallatin County Sheriff’s Deputy Mark Hernandez responded and stopped a suspicious vehicle. Upon approaching, Deputy Hernandez observed three white-tailed does in the back of the truck.

Along with the County, Fish, Wildlife and Parks investigated and later determined Welch to be the shooter of the deer. He was found guilty of three counts of unlawful possession of game animals, four counts of shooting from a vehicle, and failure to obtain landowners permission. Several other charges, including four counts of spotlighting deer, were dismissed as part of a plea agreement.

Warden Jen Williams who worked the case says, “Mr. Welch showed no regard for public safety and certainly no respect for the wildlife of Montana. Our regulations are in place for a reason: they maintain the integrity of hunting while ensuring public safety and protecting our resources.”

FWP appreciates the work of the Gallatin County Sheriff’s office, and the private citizen who first reported the crime.