There is Nothing Typical about this Antelope Buck
By angelamontana 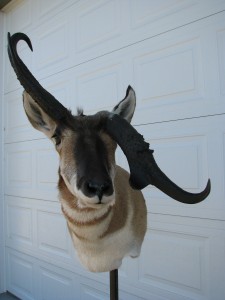 Jeff Timmons, from Kalispell, did taxidermy work professionally for a number of years and still does for his family and friends.  Well, just within the last couple of weeks, Jeff finished a shoulder mount for a friend of his–only this is no typical antelope…literally.

Tom, Jeff’s friend, was hunting in his favorite hunting spot, not far from Ashland, Montana, when he got this incredibly unique antelope.  Tom had spotted this non-typical beauty for the last three seasons prior to 2012, but for the first two years he was unable to get close enough for a shot at him.  The third year, Tom saw it again while deer hunting, but he had not drawn an antelope buck tag for the 2011 season.

It all worked out for him during the 2012 season, as persistence paid off, and he got him!  Tom was also pleasantly surprised, as he believes the buck’s horns are significantly larger than they were when he first saw him.

Now, THAT is a beautiful antelope.  Congratulations to Tom for getting such a nice, unique buck and to Jeff for the amazing taxidermy work! 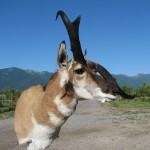 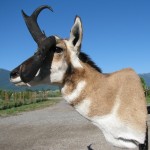 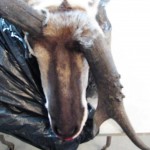 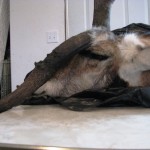