Out the door by 6am, sporting a different camo pattern for each article of clothing I was wearing, to include my shirt, my fleece, my pants, my boots and my hat, I realized that it probably looked like I let a two year-old pick out my hunting attire, but at least I would blend in if there were five different types of vegetation in the one place I would be walking later.  I envy those people that have full sets of hunting clothes with the same camo pattern.  Anyway…off we went.  (Although the old-school camo hat from my Air Force days looks like my fleece, they are not even close to the same pattern)

There was a wind advisory that morning, and the rain seemed to literally spit at us, trying to persuade us to turn around and go home, but there was no way that was going to happen–we were on a mission.  We got a lead about some potential wolf and bear activity, and we were going to check it out, regardless of what Mother Nature threw at us…or so we thought.

By the time the morning sun, still hidden behind layers of gray and steel blue clouds, lit up the sky with a pale glow, the wind had died down quite a bit and the rain had lessened.  We drove for close to an hour, discussing our taxidermy plans for the end of our (what we hoped to be) successful 2013 season, until we approached a big ol tree lying across the road in front of us.  Now, this was a “doh!” moment for us (again), as this has happened to us quite a few times in  the past, and every single time it happens, we say “we really need to get a chainsaw to keep in the tool box”.  And here we are, years later, still without one, prevented from continuing to the potential honey hole.  Being that the place we were headed to was still approximately 20 miles away, we turned around, defeated by Mother Nature, and ended up checking out our other hunting spot, where we had previously seen bear sign.  We didn’t end up finding what we were looking for there, and the rain and the wind picked up again, so it got sloppy, cold and wet, but we made it until approximately 1pm before we headed home to warm up and dry off a bit before heading back out that evening.  We ended up seeing deer and three bulls (pictured below), but that was about it.

If there is anything you take from this story, I am hoping that it would be to be prepared–more prepared than we were.  Yes, common sense, I know, but sometimes, it’s those little things that you don’t necessarily count as a requirement that become a requirement that one time, or three times in my case, when you didn’t bring everything you knew you might have needed.   You know those tire chains you were putting off throwing in your hunting rig?  Just toss them in the back…  That chainsaw that you have been talking about bringing with you in your hunting rig? Set it next to your rifle so that you grab it when you leave in the morning.  However you  hunt, be prepared, be careful and good luck!

Here are a few photos from the trip: 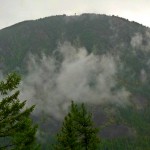 See that teeny dot in the middle of the top of the mountain? That’s the lookout tower I am hoping to rent, if it’s available. 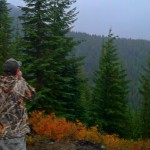 bugling–guess Im not the only one with non-matching camo patterns. 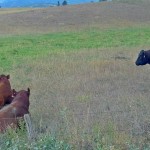 NICE bulls…. (hey, they were the only bulls we saw that day)