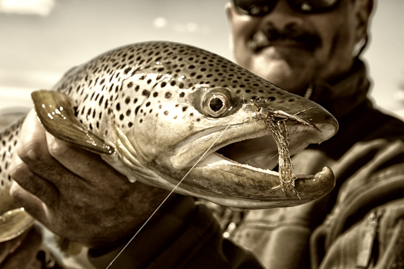 Bozeman/Butte Recreation Report by Bob Ward and Sons – 10.25.13
By angelamontana

UMR- Hone in on the slower and deeper waters for the big fish. Sculpins and stone flies seem to be the ticket try combining with a dropper combo of eggs or beatis numphs. Streamer fishing is having some success with the stripping of line technique. If you are out for dry flies use beatis patterns.

LMR- Nymphing/sub surface fishing is the name of the game. Smaller sized Woolly buggers, worms and eggs, zug bugs, try some combinations with crayfish and baetis nymph droppers. Keep your eye out for the BWO hatch going on in the warmer temps of the day.

Yellowstone- Rubber legs are working great; try different colors and different combos as a dropper to get below the surface. Egg patterns are starting to pick up some fish along with worms. The baetis hatch is still going on so give those a whirl.

Gallatin- Nymphing with rubber legs with a bead headed prince nymph was working really well. Again egg and worm patterns are starting to pick up success. Make sure to keep an eye on e the beatis hatch and use the baetis emergers and nymphs in combo with other rubber legs or worm patterns.

Fishing has been good this fall in Southwest Montana. Beaded San Juan worms have been great attractors. Red worms with an orange bead has been the trout slayer. Brook trout are still active on the Upper Big Hole and tributaries with streamers being most effective.

The Beaverhead river has been fishing steady below the spillway and Pipe Organ bridge. Rapalas and Panther Martin spinners are always a good choice on the Beaverhead. Beaded nymphs and San Juan worms are good flies to have this time of year.

The Ruby Reservoir has been good bank fishing with Krocodile Spoons and hammered brass daredevils. Mepps, Panther Martins, or nightcrawlers below the spillway are producing fish.

Georgetown reservoir has been quiet this past week. A few trout taken from the banks on nightcrawlers, powerbait, and hammered copper spoons.

River levels are up on the Big Hole. And Jefferson Rivers. This has helped move some of the bigger fish around. The Jefferson is fishing well for browns north of Waterloo. Hell’s Canyon is holding nice Rainbows for catch and release fishing.