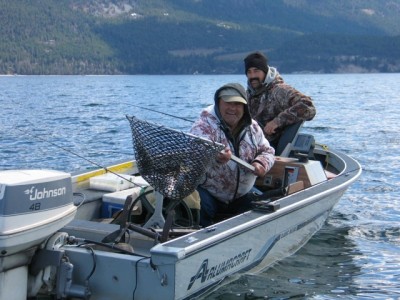 One fish, two fish, one hundred fish!!! Terry Krogstad of Kalispell turned in a total of 100 lake trout on Sunday his first day of fishing the 2013 Fall Mack Days Fishing Event sponsored by the Confederated Salish & Kootenai Tribes and sanctioned by Montana Fish, Wildlife, and Parks. It was eleven hours of continuous fishing with some good weather-no wind or rain-to reach the 100 limit of lake trout per day.

Mack Days anglers turned in a total of 2,201 lake trout over the second weekend-879-Friday, 617-Saturday, and 705 on Sunday. Total lake trout catch over the first two weekends is 4,315 entries. Up to $125,000 in Cash and Prizes will be awarded at the conclusion of the event. Entries are taken at any time and all it takes is one fish to win in the lottery style drawing.

Non-native lake trout numbers have increased dramatically over the past several years and native bull trout and westslope cutthroat numbers have decreased. Mack Days are used as a tool to reduce the non-native fish and increase the numbers of native fish. Non-native fish greatly impact the Flathead system and move up into the Glacier Parks waters causing effects on the fishery in the park. The Confederated Salish and Kootenai Tribes support and sponsor the events and use it as a management tool to help native bull trout and westslope cutthroat trout which are a part of the history of Montana and the CSKT Tribes.