Total hunter numbers and animals reported through west-central Montana’s three hunter check stations are slightly higher than the last two seasons at the close of the fourth week. The general season for big game hunting will close at the end of Thanksgiving weekend.

Overall, the Darby, Bonner and Anaconda check stations tallied 12,730 hunter-trips, 369 elk, 131 mule deer and 419 white-tailed deer through the fourth week of the season, up from last year in all categories except mule deer.

At Bonner Check Station, hunter trips through the fourth week are up from each of the previous two years, but the total harvest of deer and elk is down 6% from last year and 31% below the five-year average. Hunting conditions in the Blackfoot—the source of the Bonner data—have been especially poor this year, and the scattered snows turned crunchy with the colder temperatures this week, according to Montana Fish, Wildlife & Parks (FWP) Regional Wildlife Manager, Mike Thompson.

Hunter trips and harvests through Anaconda Check Station this year have been equal or lower than last year, and biologist Ray Vinkey says that little snow and mild conditions are keeping elk scattered, making hunting challenging.

The percentage of hunters with game is 7.3% through the first four weeks of the season, down slightly from the five-year average.

“The hunter success percentage from the check stations is considerably lower than the hunter success that is registered in the statewide hunter harvest survey,” Thompson said. “The percentage of hunters with game through check stations includes many of the same hunters on multiple trips. A hunter might be tallied as unsuccessful on several trips before being tallied as successful.”

For the second year, biologist Vickie Edwards has operated a check station on weekends at the mouth of Fish Creek, in Mineral County. So far this season, she has checked 1,286 hunter-trips, 3 elk, 17 mule deer and 48 white-tailed deer, generally on par or slightly up from last season. 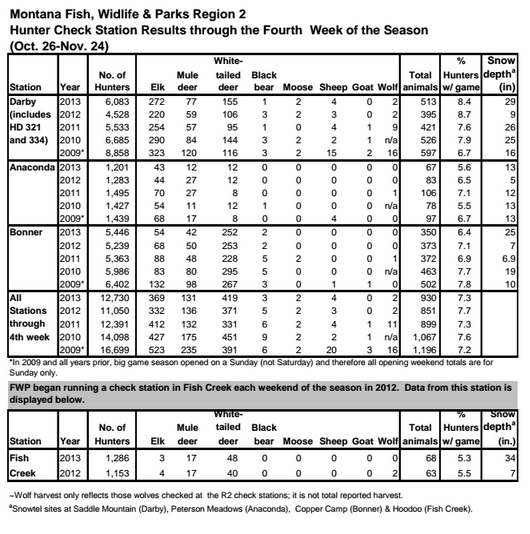