At the six northwest Montana check stations, whitetail deer harvest finished ahead of last year’s totals as the season wrapped up on Sunday.

At the six northwest Montana check stations through the end of the season on Sunday, December 1, a total of 18,262 hunters checked 1,112 white-tailed deer ( 985 of these were bucks), 134 mule deer, and 56 elk for a 7.1 percent rate of hunters with game. This is slightly higher than the 6.5 percent of hunters with game last year.

Hunters checked about the same number of mule deer, but fewer elk as compared to last year. The number of hunters in northwest Montana was very similar to last year’s total.

According to FWP Wildlife Biologist John Vore, whitetail bucks, a reliable indicator of the population, are up significantly from the last three years. “The increase in bucks harvested is a good indication that the whitetail population continues to recover from a recent low in 2009,” Vore said. “As expected, based on our spring surveys, many of the bucks harvested were yearlings and 2-year olds.” Vore added that there was also a good representation of 5-year old and older trophy bucks in the harvest.

Wolf harvest: Through the end of the general deer and elk season, hunters in northwest Montana have taken 32 wolves. Statewide, 93 wolves have been taken. This is slightly ahead of last year at the end of the general deer and elk season. The wolf hunting season continues until March 15. Hunters can still purchase a wolf hunting license, but there is a 24-hour waiting period before it is valid. Wolf trapping begins on December 15. Wolf trappers must purchase a furbearer trapping license, and have completed the wolf trapping certification course to trap wolves. The bag limit is 5 wolves per hunter/trapper in any combination of hunting or trapping. 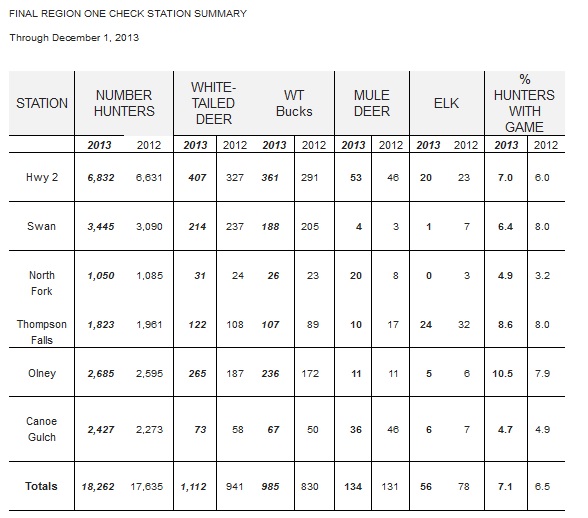