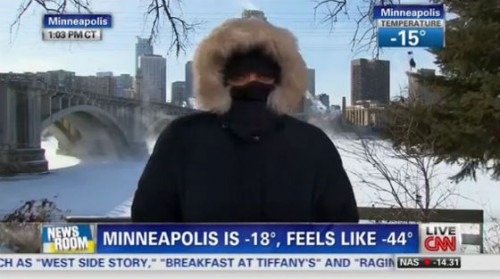 The wind is forecasted to be almost hurricane force here in western Montana today. Wind is one of the only weather conditions that I cannot stand, but being from eastern Montana, it is something that I am used to seeing in extreme cases. But, with the recent polar vortex that hit the midwest, scientist are calling Americans “weather wimps.”

When computer models estimated that the national average daily temperature for the Lower 48 states dropped to 17.9 degrees on Monday, it was the first deep freeze of that magnitude in 17 years, according to Greg Carbin, warning meteorologist for the National Oceanic and Atmospheric Administration.

That stretch — from Jan. 13, 1997 to Monday — is by far the longest the U.S. has gone without the national average plunging below 18 degrees, according to a database of daytime winter temperatures starting in January 1900.

In the past 115 years, there have been 58 days when the national average temperature dropped below 18. Carbin said those occurrences often happen in periods that last several days so it makes more sense to talk about cold outbreaks instead of cold days. There have been 27 distinct cold snaps.

“These types of events have actually become more infrequent than they were in the past,” said Carbin, who works at the Storm Prediction Center in Norman, Okla. “This is why there was such a big buzz because people have such short memories.”