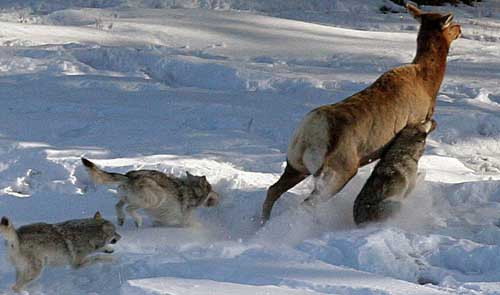 Hunters are Abandoning Some Parts of Montana, Idaho, and Wyoming, Turning their Attention Instead to Wolf-free States
By angelamontana

On the topic of wolves…

The following article, posted on petersenshunting.com (shared with the Montana Outdoor Radio Show via Dennis Baxter), is a good read for anybody interested in wolf management in Montana and elsewhere:

Things were pretty good the first year Drew Johnson and a group of friends hunted elk in Montana’s Gallatin National Forest. He arrowed a 4×5 bull near the northern boundary of Yellowstone National Park in 2000, but things went down hill the next season.

“Every time we tried cow calling or bugling, we called in wolves. We saw quite a few elk carcasses, and we heard wolves howling around us every night,” recalls Johnson, a Farmville, Virginia, dentist. “We never saw an elk.”

He and his friends moved to a different part of Montana and had a few good years before the wolves eventually caught up to them again. The elk disappeared, so last fall Johnson and his friends booked a hunt with a New Mexico outfitter, a move they plan to make permanent.

“I’m not going back to Montana,” he says.

Johnson isn’t alone. Hunters are abandoning some parts of Montana, Idaho, and Wyoming, turning their attention instead to wolf-free states. The number of non-resident elk hunters traveling to Idaho was down 23 percent in 2011, and for the first time in 30 years, Montana did not sell all of its non-resident elk licenses during the general drawing in 2012.

No wonder. As wolf populations have increased, big-game numbers spiraled downward. There is no better example than the elk herd north of the Yellowstone border, the same region Johnson used to hunt. Land that once had 19,000 animals in 1995 now holds less than 4,000.

Elk numbers in other wolf territories are experiencing similar declines, despite assurances from some pro-wolf groups that the predators would only prey on the sick and weak. Turns out, they are taking a huge toll on elk calves, too. Cow-to-calf ratios in some parts of Montana have fallen to as low as 11 calves per 100 cows, a number too low to maintain current populations. Montana Fish, Wildlife and Parks cut the number of elk licenses in some units as a result.

Despite populations six times above the minimum recovery goal of 300 wolves and despite their devastating impact on wildlife and hunting, some anti-hunting organizations still aren’t satisfied. An attorney representing Earthjustice recently requested the U.S. Fish and Wildlife Service (USFWS) allow the region’s wolf population to grow as high as 5,000 animals. A single wolf can kill up to 35 elk per year.

The Service balked, but even after several hunting seasons with increasing quotas and bag limits, the northern Rocky Mountain wolf population has declined only slightly from a record 1,800 animals.

Wolf populations are booming in the Great Lakes, too. They were removed from the Endangered Species List in Michigan, Wisconsin, and Minnesota in 2011, and all three states have held at least one hunt since then. An estimated 3,700 wolves live in the northern Great Lakes region.

That’s not good enough, either. The Humane Society of the United States is suing the USFWS over the Great Lakes region delisting. Defenders of Wildlife declared a “national wolf emergency,” calling the current USFWS proposal to delist wolves nationwide a “disaster.”

Defenders continue to refer to the managed wolf hunts as “slaughters,” and the Sierra Club also urged its members to “help stop the wolf slaughter” on a Web page that conveniently solicits donations.

The “slaughter” both anti-hunting groups are referring to involves carefully managed, highly regulated, closely monitored hunts, such as the one in Wisconsin.

The 2013 season was closed when hunters and trappers reached the established quota of 251 in just a few weeks.

“Our state management plan calls for a minimum population of 350 animals. The population is somewhere between 809 and 839,” says Wisconsin Department of Natural Resources large carnivore specialist Dave MacFarland.

“The U.S. Fish and Wildlife Service set a minimum threshold of 100 wolves between Michigan and Wisconsin. There is no risk we would ever drop below that number and a very low risk we would fall below our state management objective.”

He adds that the DNR sold just 2,510 wolf tags, and all successful hunters are required to report their kill within 24 hours.

“We close each unit once the quota is met for that unit,” he says. “We have more information on wolves than any other animal in the state.”

So does Minnesota, which has an estimated 2,200 wolves. The hunter success rate last year was just seven percent. Nearly 20,500 Montana hunters and trappers, including 247 non-residents, bought wolf tags in 2012. They killed 225 wolves, the quota set by Montana Fish, Wildlife and Parks. Wolf populations have declined slightly.

That may be good news for Western big-game hunters, but populations continue to rise in Oregon and Washington, which do not have a regulated hunting season—at least not yet. Neither state had a confirmed resident wolf as recently as 2008.

Now they have 89 wolves between them, a number that is certain to rise, even if the proposed nationwide de-listing allows both states to adopt a managed wolf hunt.

A Wisconsin survey found that more residents supported the state’s hunt than opposed it, with a large majority of those living in wolf country supporting it. Two-thirds of Michigan residents support wolf hunting.

“We’re completely against the harming of living things,” said Earth First! spokesman Grayson Flory in an interview with the Missoulian.

Apparently, no one told him about the impact of wolves on elk or elk hunters like Johnson.