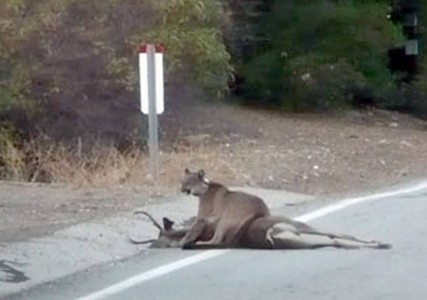 Montana Fish, Wildlife & Parks (FWP) is looking for volunteers to form a mountain lion work group to assist in the development of harvest quota recommendations for the 2014-15 lion hunting season in west-central Montana.

“A recent research effort to update and improve lion density estimates for the upper Bitterroot Valley has generated a lot of interest about how those results will be applied to lion management,” said Mike Thompson, FWP Region 2 Wildlife Manager.

“The higher density estimates raise the question of whether we need to increase harvest quotas to meet current objectives for lion management,” Thompson said.  “The role of the work group will be to explore this question and develop a quota recommendation that considers diverse inputs.”

FWP is scheduled to present its proposed lion harvest quotas to the Fish and Wildlife Commission on April 10.  These “tentative” quotas will then be open to public comment through June 12.

The Commission will consider the recommendations of the work group, alongside all other public comment, when it renders its final decision at its June 12 meeting, according to Quentin Kujala, FWP Wildlife Division Sections Coordinator.

“We hope that the work group effort will serve the lion resource, the Commission and the public by offering additional input from a diverse group of people who invested significant effort in working towards solutions on lion quotas,” Kujala said.

The lion work group meetings will be facilitated by University of Montana’s Dr. Mike Mitchell. Dr. Mitchell uses a process known as “structured decision making” that focuses key stakeholders on development of a problem statement, fundamental objectives, alternative actions, and a recommended course of action.  Volunteers need to be ready and willing to work within this process.

“In this case, we want to mine the science, explore its strengths and weaknesses, and put it in its proper place in a decision making context,” Mitchell said.  “You have to have solution oriented people to do this—people who are willing to listen and communicate effectively, think critically, examine issues objectively, and work together collaboratively and respectfully.”

FWP is looking for twelve volunteers who are stakeholders in lion management in FWP Region 2.  Geographic representation is sought from the Bitterroot, Blackfoot, and the Clark Fork—both east and west of Missoula.  Representation should also be diverse in terms of attitudes and interests, including houndsmen, outfitters, hunters and the general public.

Meeting dates are April 21-22 and May 7-8, and all meetings will be held in Missoula. Volunteers who can commit to this process for all four days are asked to send a one-page letter of interest that includes name, mailing address, phone number, email, and a description of interest in serving on the lion work group.