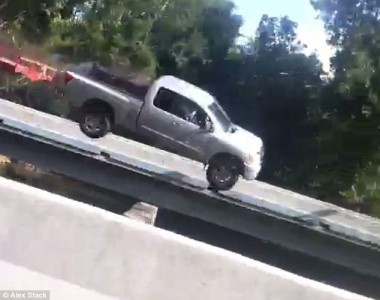 According to a post on dailymail.co.uk, back in August of 2013, a 59-year-old man, Mark Moerland, was driving his truck, while pulling a trailer with a lawnmower behind it, and launched his vehicle and trailer into a creek.  He was later rescued by the Delhi Township Fire Department and was conscious and talking with police on the scene. His injuries, however, were listed as “serious”, as Moerland suffered a fractured leg and lower back and dislocated ankle, along with a partially collapsed lung.  Doctors believe he man suffered an unspecified “medical condition” before the crash that made him drift into the median and lose control.

With all of the dirtbikers, 4-wheelers, boaters, snowmobilers and street bikers in Montana, we see a lot of trucks pulling trailers on the road. The actual footage below shows just how quickly something can change while on the road–especially the freeway where the speed limit is higher.  Be careful out there!

(Video Source: Mediaite & “Alex Stack” on Vine-and thanks to Brandon Hockett for sharing)