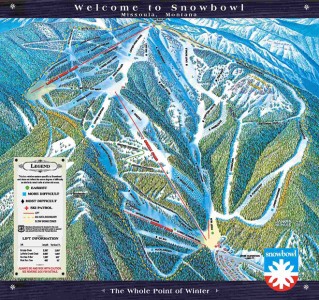 The two skiers from Maine exploring terrain of Montana Snowbowl Saturday skied off a ridge and became separated from a friend on Friday afternoon. Unfortunately they spent the night out in the open, but search efforts have paid off, the two were found Saturday morning. Here is an update from the Missoulian:

Two skiers lost overnight in the mountains north of Missoula were located at about 10:30 a.m. Saturday by Missoula County Search and Rescue. They are alive and safe.

The men were about three miles into the wilderness after they were separated from a friend Friday afternoon while skiing on the backside of Montana Snowbowl.

Both skiers were taken to the hospital, said Paige Pavalone, the Missoula County Sheriff’s public information officer. Pavalone did not give their condition, but said both men were able to hike out of the backcountry where they were found under their own power.

Search and rescue crews spent several hours in sub-zero temperatures Friday night looking for the skiers. They called off the search for several hours but continued at 3:30 a.m. Saturday.

At about 8:15 a.m. Saturday, searchers were able to make contact with the skiers by cell phone. They were eventually located by a Search and Rescue team led by Jeremiah Petersen.

The lost skiers called 9-1-1 around 5:30 p.m. Friday. The third skier called 20 minutes later to tell law enforcement that his friends were lost. The skiers were visiting Montana from Maine, Pavalone said.

At the time, search and rescue crews were also attempting to locate an elderly couple and an 8-year-old boy trapped in an avalanche in the Rattlesnake at the base of Mount Jumbo, all of whom were recovered safely.

The Missoulian story can be found here