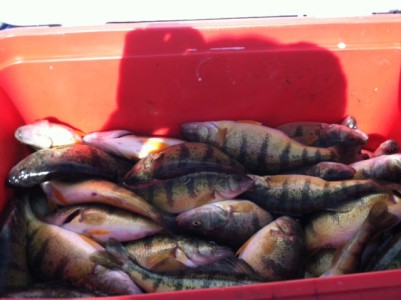 “Doesn’t Anybody Work Anymore?”–The Captain has a Great Day at East Bay
By angelamontana 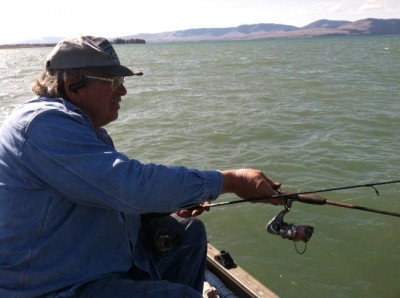 The Captain took advantage of the nice weather and excellent reports out of Flathead Lake to go perch fishing Tuesday. Temperatures were in the low 70’s but the wind kept it cooler. The water temp reached a high of 49.4 degrees. Matt Swenson from Missoula and Dick Zimmer “The Macman” went along. There were plenty of boats fishing as many anglers evidently had the same idea, most putting in at the ramp by the KwaTaqNuk Resort and Casino in Polson.

The parking lot was full and most everybody came back by noon or 1 with more than their fair share of nice sized perch. “We kept 80 that were in the 12-13 inch class”, said Brandt Hamernick from Missoula. Mike Howe and a fishing buddy came down from Kalispell to enjoy a day of fishing. “Doesn’t anybody work anymore”, remarked Swenson after seeing all the anglers.

The boats were spread out in East Polson Bay and everyone was catching fish. We were in 4.5 to 5 feet of water and ended up with over 60 nice sized perch for our efforts. We were using the Zimmer Tackle perch/fly set-up tipped with a piece of night crawler. “I expect the perch bite will go for another couple of weeks”, said Zimmer. 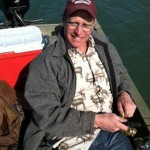 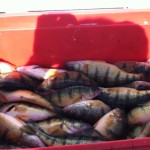 (Info and photos via the Captain)