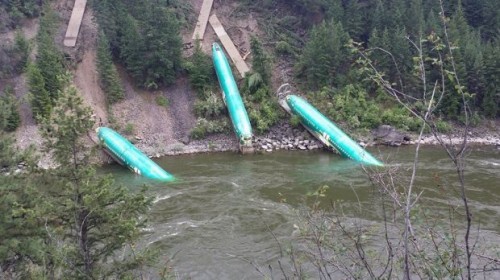 A train derailment near Fish Creek Thursday afternoon left airplane fuselages in the river 10 miles west of Alberton near Fish Creek Road and Interstate 90. Montana Rail Link is working to clean up remaining debris from the area, and MRL spokeswoman Linda Frost said MRL will begin to remove the remaining cars and aircraft fuselages from the river Sunday, but it’s unclear how long that process will take.

Here is more of the story from Missoulian:

Montana Fish, Wildlife and Parks had closed the Alberton Gorge section of the Clark Fork and several access sites Friday, but later reopened them.

“We intend to keep it open unless we feel that there is a safety concern,” said FWP spokeswoman Christine Oschell.

She said FWP hadn’t decided how to handle people on the river when MRL removes the rail cars and fuselages Sunday and Monday, but agency officials are in communication with the railroad and would be on hand during the work.

Oschell said members of the Whitewater Rescue Institute were on the Clark Fork in the area of the derailment, informing floaters of what had happened and watching for hazards.

“It’s really because of them we are able to have this be open,” she said.

No one was injured in the derailment, and the cause remains under investigation.