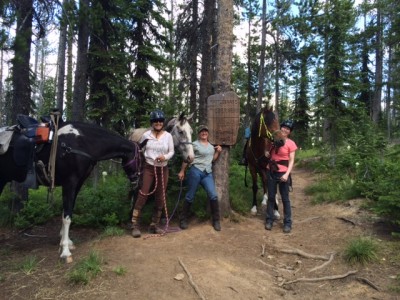 Ten Feet Tall in the Rattlesnake Wilderness…(Probably Less)
By angelamontana

You can’t go wrong with a local trip up the Rattlesnake Wilderness, according to Berny Croy of Missoula.

Berny described the trailhead specific for horses, on her most recent riding adventure, as welcoming.  She was pleased that it was along with the Rattlesnake Creek so the ponies could quench their thirst.   Berny said that she, on Sarge (a Tennessee Walker), and her two riding pals, Donna on Berny (a Warmblood Mare) and Dianna on Jessi (an Arab), started off across a large wood bridge and said the trails are incredible, even with the heavy use on the lower trails.  She reminds equestrians to proceed with caution, stating that “you can run into a fast biker just about anywhere”.  Berny was relieved that most bikers are aware that equestrians have the right away, though.  Not everybody realizes that just the sight of a bike, or even a person with a backpack on, can send a horse into “melt down mode”–I yi yi.

A few years ago, an unknowing biker rode up on Berny’s friend, Donna, and her horse ran off the trail about 50 feet or more in a panic.  When the biker realized what happened, he apologized and said “he didn’t know” that bikers and hikers should yield to equestrians.   One can only imagine how dangerous that can be for everybody involved.  Berny reinforces that she loves that everybody is able to and does recreate and enjoy the “blessed ground” we share, she just hopes people realize we are all sharing these areas.

On a side note, Berny did acclimate her horse to bikes.  “I tied him to hitching post, slowly moved the bike toward and around, to let him get familiar with the apparatus,” she said.  “Eventually I was riding the bike in one barn door and out the other side , around in circles behind him,” Berny recalled.  Berny was aware that the trail is used by all types of recreationalists, and she wanted to make sure Sarge was prepared for anything.  And now, back to the adventure…

Berny and her riding crew headed for the Stuart Peak trail.  “I’ve heard of folks riding past the top of Stuart Peak, but I’ve also heard of horses not making it out,” she said.  Although Berny has not hiked that particular trail, she estimated it to be about 6 miles up from the bottom.

All in all, it was a great ride, even though it was a super hot day.  She said the bear grass is “going crazy” up there, too.  “I don’t see Beargrass every year,  I would guess it’s been about 5 years since I saw beargrass in volume,” Berny commented, stating it was “so cool” of a sight. Check out the pictures below: 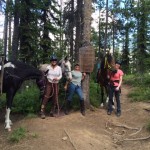 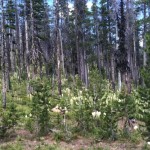 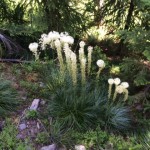 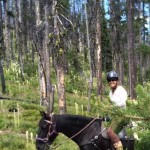 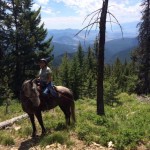 Check back to see where Berny and her ten feet tall riding crew adventure to next!