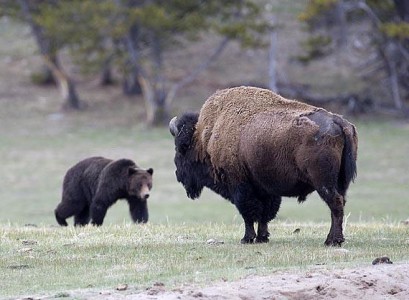 The Bison is the Grizzlies biggest predator.
By OutdoorAly

Ok, well maybe not in nature but when it comes to College football the North Dakota State Bison reign supreme! In less then one hour, our Montana Grizzlies will try to hunt down the Bison and take home the upset in Fargo ND.

Here is the matchup described by Get’em_griz on the egriz forums:

What to know about the North Dakota State Bison

If you already didn’t know or have been living under a rock, the NDSU Bison have won the last three National Championships in 2011, 2012, and 2013.  They could have had an unprecedented 4th straight National Championship appearance in 2010 had they been able to beat Eastern Washington in Cheney during a semifinal matchup.  Currently, the Bison hold the longest FCS winning streak at 27 games, breaking the old record of 24 held by none other than our very own Grizzlies.  The last time North Dakota State lost was on Oct. 13, 2012 to Indiana State losing 14-17.  Before that loss, the Bison were on a 9-game winning streak.  If they had been able to avoid the upset from Indiana State, they would currently have a 35-game winning streak.  The Bison have won 55 games and have lost only 7 times since 2010… that is pure domination.  In the last 5 years, the Bison have beaten all 5 of their FBS opponents:

NDSU is a very similar program to Montana in regard to winning tradition.  The Bison have only had 3 losing seasons since 1975 (1975, 2002, 2009), and NDSU has a large passionate fan base that rivals Griz Nation.  The Griz are heading into Bison territory tomorrow, where NDSU has gone 7-0 against Top-10 FCS opponents in games played in Fargo.  The Griz are looking to end that streak along with the 27-game winning streak the Bison are enjoying.

The Bison will be led by QB Carson Wentz.  Wentz, a 6-6” Junior from Bismark, ND is replacing the all-star Brock Jensen who led the Bison to their 3-straight National Championships.  In 2014, Wentz has thrown for 633 yards with 3 touchdowns and 2 interceptions, averaging to 211 yards/game.

NDSU’s rushing game is the strength of this Bison squad, which is led by John Crockett.  In 2014, Crockett has rushed for 344 yards and 6 TDs, averaging 115 yards/game.  Just like the Griz saw at Wyoming, expect the Bison to utilize Crockett big time, especially once the Bison get into the red-zone.

You won’t find a better defense at the FCS level than what the Bison have.  They flat out shut teams down, especially in the second half of games.  This year, the Bison on average have given up 236 yards/game, holding teams to 162 passing yards/game and an astounding 62 yards/game on the ground.  Comparatively, the Griz have a solid defense as well:

The Griz are heading into the 2nd – toughest place to play in the FCS.  It’ll be loud, and the Bison will be the toughest opponent the Griz will see until they meet up with Eastern Washington down the road.   The D-Line will be tested big time against the NDSU rushing attack, and the defense as a whole should do its part to keep the Griz in the game.  If the Griz have issues moving the ball on offense, it’ll be a long afternoon with the Bison winning big.  If the offense finds consistency and is able to attack and play mistake-free football, the Griz should be able to leave Fargo with a win.

Last Thought:  Be positive and expect the best from these guys!

Our team is pumped up no doubt, and Griz Nation should be too!  These Griz are underdogs for the first time in a long time, but support these guys knowing they expect to go into Fargo and win the game.  And remember this: