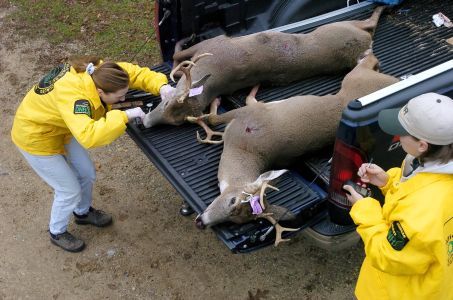 BILLINGS — Weather in south central Montana played a big role in the opening day of the 2014 general big game season.

Saturday’s weather was warm – well into the 60s in most locations – and still. By Sunday temperatures dropped to the 50s, but the wind blew as fast as 50 miles per hour. As a result the number of hunters who brought home game was lower than last year and the long-term average.

At the Montana Fish, Wildlife and Parks Lavina check station wildlife biologist Ashley Taylor checked a record 496 hunters Saturday and Sunday. That is 23 percent more than the 21-year average of 402 hunters and 32 more than in 2013. Percentage of hunters with game was only 13 percent – the lowest rate on record. On average 27 percent of hunters coming through Lavina on opening weekend have game animals.

One bright spot at the Lavina check station was the number of elk checked. Taylor said hunters brought in 37 elk, compared to 22 last year and a long-term average of 11.

Sixteen mule deer were checked, down one from the same weekend last year and 62-percent below the long-term average. Only four white-tailed deer were brought in, down 15 from 2013 and 89 percent below average.

At Columbus, FWP wildlife biologist Shawn Stewart checked 235 hunters over the weekend – over the long-term average of 200 hunters, but below the 257 during the same weekend in 2013.

Just 34 percent of the hunters who stopped at Big Timber had game – the second lowest opening day ever observed.  Only 2013 opening day success was lower.

Paugh checked 12 white-tailed deer over the weekend – 10 fewer than the same weekend last year and 45 percent below the long-term average. The mule deer harvest – 35 for the weekend – was near average and up 67% from the 21 checked last year.

The 12 elk that Paugh checked were the fewest since 2009 and two fewer than last year.

At Laurel, harvest was very low with only 28 animals checked. FWP research biologist Jay Watson checked 135 hunters – down 33 from 2013 and, well below the long term average. Over-all hunter success was very low with just 21 – down from 29.2percent last year.

Montana’s five-week general big-game season runs through the Sunday after Thanksgiving. Hunters are reminded that they must stop at any check station they pass while hunting, whether or not they have harvested game. Check stations primarily are intended for biologists to gather statistical information about animals and hunters.