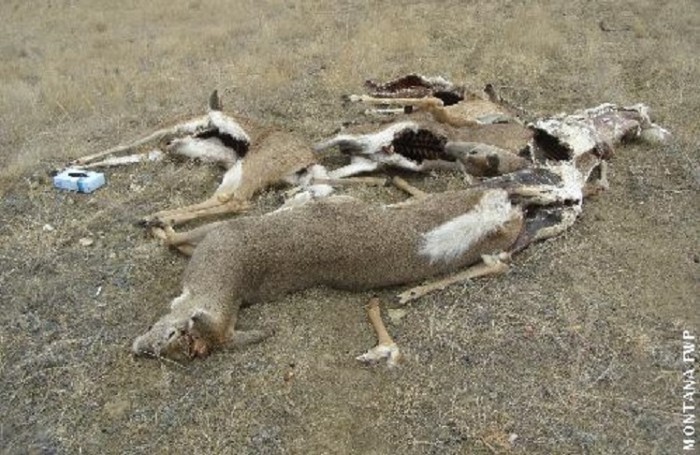 Wardens Seek Information on Deer Dumped in Glendive
By angelamontana 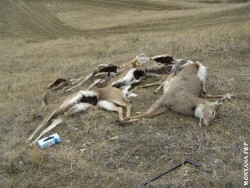 (Miles City) – Montana Fish, Wildlife and Parks (FWP) Game Wardens are asking for the public’s help in leading them to those responsible for multiple deer recently abandoned and wasted near Glendive.

Six white-tailed deer were discovered on February 14th in a pile just south of Glendive in the Short Pine OHV area on Marsh Road. Four of the deer were bucks, two were does.

FWP Warden Jonathan Kaiser is investigating the incident and says all indications are that the deer were abandoned and left to go to waste. “Up to four of the deer were still completely whole with no meat harvested,” Kaiser said. “For the most part, it was almost a total or complete waste of edible meat.”

Little was taken from the deer in the way of trophies either. According to Warden Kaiser, all but one of the bucks still had its antlers with the largest buck appearing to have had its antlers removed.

Warden Kaiser believes the poaching and dumping of the deer had taken place fairly recently. He also noted that the investigation thus far has yielded some evidence left at the scene. Kaiser is asking the public for assistance in solving this wildlife crime. He urges anyone with any information surrounding this incident to contact him, adding that, “most sporting men and women would consider this an egregious waste.”

Anyone who has information on the deer poached and dumped at the Short Pines OHV Area can contact Warden Kaiser directly at 406-853-7900 or 406-234-0916 or can call FWP’s 24-hour TIPMONT line at 1-800-847-6668. Those calling the TIPMONT line may remain anonymous if they so choose. Individuals who contribute information leading to a conviction may be eligible for up to a $1,000 reward.

In a separate incident, Warden Kaiser is also investigating the illegal waste of a portion of an elk dumped near the I-94 – Cracker Box Road interchange. Anyone with information surrounding this incident is also asked to contact Warden Kaiser or call the TIPMONT line.