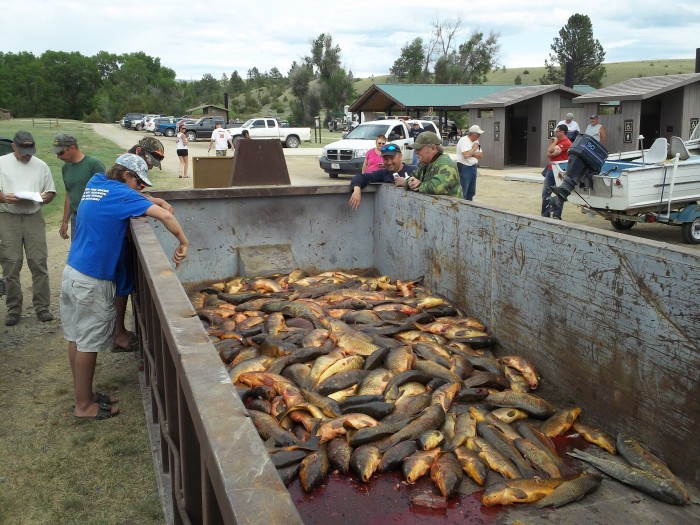 The skies were cloudy but clearing and the clock on my dashboard agreed with the growling in my stomach. I had heard from a friend of mine that carp along the shoreline of Canyon Ferry Lake were making the water boil. The day after the annual Carp Safari held in early June by the Montana Bowhunter’s Association (MBA) my friend Marlon Clapham and his family each shot over 100 fish with their archery equipment. Marlon got so tired from shooting carp that he could hardly pull his bow back anymore. The chance to shoot carp that weigh up to twenty pounds and filling a barrel full of winter bait for my trapline sounded good to me. I just hoped I’d have the same luck.

There are hundreds of small bays and inlets around the lake that hold carp when they are breeding. The first three bays I checked out didn’t have any and I began to worry. I drove past a few campgrounds and pulled over every mile or so to glass for spawning fish. The sandy shores didn’t seem to be holding much of anything so I turned my focus to a shallow bay with weeds. I turned off the main road and then onto another dirt road that headed straight to the lake. As my pickup raised a dust cloud behind me my anticipation was building. I don’t know much about aquatic vegetation but this bay had plenty of it and I decided that if there were no carp in this one I was going to call it quits.

As I stepped up to the shoreline the water looked like it was boiling, literally. Carp fins emerged, submerged, swirled and danced as the big fish vied for a prime spawning location. I changed into shorts and sandals and grabbed my recurve bow fitted with a bow fishing reel canister and a fiber glass arrow tipped with a gar point. I knew that when the conditions are right and the carp are spawning, the action can be non-stop but this was unbelievable! 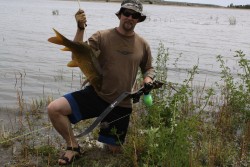 Within the first minute after my feet crunched the rocky edge of this carp Utopia I was at full draw and two seconds later the first arrow flew. My line tightened and the green knock wobbled just above the surface as line from the canister dumped freely. A squeeze on the brake and a couple quick turns of my reel let me know the 6 pound carp wasn’t going anywhere. In about a minute I had the big fish landed and turned the gar point downward to shake it off.   As I walked along the shoreline carp darted out of the weeds just beneath my feet startling me momentarily as the muddy water rolled.

Arrow after arrow and fish after fish the action never slowed and I had to remind myself to focus on one fish just like staring down a shotgun barrel at a flock of ducks. “Pick one, pick one…” I reminded myself. I get distracted easily enough and I’ve never been able to focus when given too many options.  This was about as much fun as I could stand.

Within 40 minutes I was headed back to my truck with a stringer of 10 carp averaging about 8 pounds. A perfect amount to chunk up and pack into glass jars for sun-rendering fish oil for my winter trapline.

Carp are found in protected bays and back water areas regularly throughout the late spring and summer but the fishing is best when they’re spawning. It isn’t always easy to find carp even when they are most active. Big waves or bad weather can push the carp into deeper water. But even on the rough days there can be protected bays full of spawning fish within striking distance. On days when some bow fisherman haven’t seen a fish others may just be a couple miles away on the same body of water wearing their shoulders out flinging arrows at hundreds of spawning carp. Opportunities are often available for anglers willing to search.

Few archery experiences offer more opportunities for both young and old to share time together while honing skills and helping wildlife than bow fishing for carp. Wherever carp are found there’s likely a lot of them because they are so prolific. With numerous large, shallow bays and weeds Canyon Ferry Reservoir located in Montana was made for bow fishing.

In late spring and early summer spawning carp roll and chase each other along the shoreline making excellent shot opportunities for anglers willing to wade. During the spawning season carp are preoccupied with their annual ritual and this is when these big fish are most vulnerable to a bow and arrow. Using boats can be a good option as well. Slowly paddling along the edges and keeping a keen eye out for carp can yield plenty of shot opportunities. Boats must be quiet once they’re in the shallow bays because carp will spook easily. Maximum Shots of 10 or 15 Yards are the norm because of the heavy fiberglass arrows and shots of 5 yards or less is preferable. Heavy fiberglass arrows are necessary for penetrating the water with enough energy to punch through these thick skinned fish.

While shooting from a boat is fun I prefer to wade-fish because it creates a true spot and stalk hunt.  The cool water on a hot day is an added benefit and all you need is a pair of shorts and old sneakers or sandals to get in the middle of spawning fish. With either method, a pair of polarized sunglasses really helps seeing the fish. Without them the glare of the sun will limit your shooting opportunities even when the carp are plentiful. A cheap pair of polarized safety glasses will work just fine and you can use them for other things when you’re not fishing.

Most bow fisherman know that you’ve got to aim lower than you think because the refraction of the light makes the fish appear higher in the water than they actually are. I’ve learned that aiming about a foot under the fish was just about right. One other thing I’ve learned is that when the fish are in 1 foot of water aiming low isn’t necessary but when you miss getting arrows stuck in the bottom of the lake is a real problem. The gar point arrow heads are great for holding big fish on the arrow and they are equally adept at holding fast when driven deep into the bottom of a lake.

Because of the shallow water conditions where the carp are spawning, be sure to bring a half dozen or more arrow heads along with you to replace them when they break. Avoiding shots that are straight down in shallow water is advisable and by waiting until the fish are out about 20 feet or more while wading will change the shot angle enough to avoid sinking the arrow into the lake bottom.

Another great tip is to turn the gar point away from the fish to make it easier to pull the arrow out or unscrew the arrow head completely before shaking the fish off. I know bow fisherman who just rip the arrow out of the fish and they’re replacing broken arrow heads a rate that’s too expensive for me.

Retrieving a carp that’s hit is easiest to accomplish by pulling the fish in to shore rather than trying to reel the fish in like you might with a fishing rod and reel. The best technique I’ve found is to simply walk backwards and beach the fish then lay the line down and walk to the fish. This also makes it less likely to tangle the line; another reason I prefer wading for carp over using a boat.

Every year the MBA holds a carp safari tournament on Canyon Ferry Lake near Helena, Montana.  The tournament offers fun for all and the slogan is “Have You Been Carpified?” Some years hundreds of carp are brought in by bow fishing anglers in an effort to alleviate the numbers of this unwanted species. “We obtain approval annually from FWP (Montana Fish Wildlife and Parks) to run the Safari as a fishing tournament.  They love us, because carp are an invasive species!” explained Joelle Selk; President of the MBA and one of the event’s organizers. 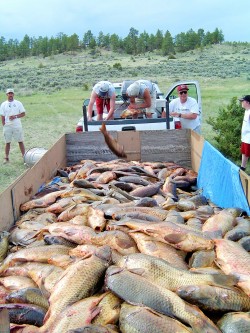 The Carp Safari is a great event with prizes and activities for children. But you don’t need to limit bow-fishing for carp on Canyon Ferry Reservior to this annual tournament, helping remove these invasive species is fun and can be done anytime the fish are visible.

The carp have many uses. While some carp enthusiasts swear by recipes for these fish, once regarded as fine table fare throughout the United States, carp taken during this event are placed in huge dumpsters and later transported to composting areas at local transfer stations. I personally use the carp for sun rendering fish oil used on my winter traplines and for attracting bears to bait sites during Idaho’s spring bear baiting season.

Getting Your Bow Ready

Modifying your deer hunting bow for carp is fairly easy. All it really takes is attaching a bow-fishing canister or spool onto your bow with braided line. I use a separate bow that I purchased for a bargain price rather than my hunting bow because bow-fishing can be hard on equipment. Slippery rocks, boats and continuously laying my bow down on the ground to haul in fish aren’t something I want to do to my expensive archery equipment. I like the simplicity of a recurve or long bow and have used the same one to take carp for years. The biggest expense after getting everything all set up is replacing the arrow heads.

When the conditions are right the bow fishing action can be non-stop and bow fishing opportunities on Canyon Ferry Lake are best from early June through July. The access is easy and there are campgrounds all along the east shore. A conservation stamp and a fishing license will solidify your privilege to pull as many large scaled breeders up on the rocks as you can handle.  Bow-fishing opportunities can be found all over the country for a variety of fish, but be careful, it’s almost more fun than you can stand!