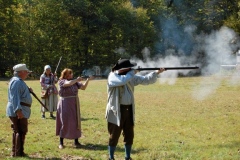 Are US Women Falling in Love with Muzzleloaders ?
By Toby Trigger

A shooting club called Blue Ridge  Muzzleloader Club claims that women’s participation in muzzleloader shoots are on the rise.  The following is a excerpt from an article  describing this national trend:

No longer are traditional muzzleloader shoots a “boys’ club,” as participation by women as day shooters and campers at events like the Eastern Pennsylvania Rendezvous and Shoot being held by Blue Ridge Muzzleloader Club, Summit Station, May 21-25, continues to be the fastest growing segment of the sport.

“In the past decade, the number of women owning firearms and participating in target shooting and hunting has soared,” Sanetti said. “This study helps us understand why women are choosing to purchase firearms and accessories and what shooting activities appeal to them most.”

These findings came from a well-organized and equally well-financed study conducted in 2014 and focused on women ages 18-65 who own at least one firearm. More than one third of women in the study were new gun owners, having purchased their first firearm within the last three years.

This group of new gun owners, who are primarily ages 18-34, reflects the changing demographics among women choosing to own firearms. This change is captured visually in NSSF’s new info-graphic “Girl Power” and complements the new report.

“The women’s market is a force in our industry, and manufacturers, retailers and shooting ranges are making changes to their products and services to satisfy women’s tastes and needs,” NSSF director of Industry Research and Analysis Jim Curcuruto said. “This report will assist anyone interested in knowing more about women’s enthusiasm for and attitudes toward firearms.”

This post is an excerpt from the original Full article was written by :