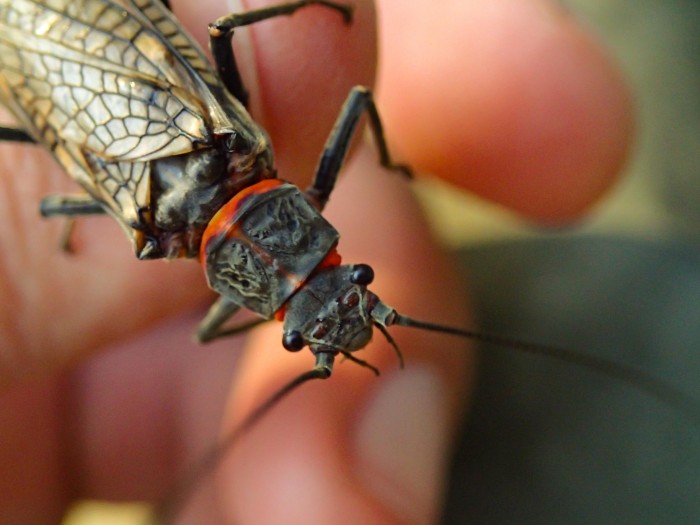 It is a once a year occurrence and it won’t be around for very long . Fly fishing anglers go crazy when it happens. If these crazy anglers actually go to work instead of calling in sick then they are sure take work off early and head east of Missoula. You have probably guest what I am referring to by now. The famous salmon fly hatch is now on at Rock Creek. “The earliest that I have seen salmon flies has been May 19th”, reported Carolyn Persico longtime owner of Rock Fisherman Mercantile, and this year the first salmon flies spotted were in fact on May 19th last week”.

What actually is a salmon fly? Well according to my research and thanks to the Wikipedia here is what I found out, “The giant stonefly commonly called the salmon fly, is an aquatic species of the family Pteronarcyidae. The salmon fly can grow to lengths in excess of two inches. The nymphs’ dorsal side (back) is dark in color, although their ventral side (belly) is lighter. The coloring can vary, and subtle patterns are occasionally found on the abdomen. They eat stream debris partially broken down by other organisms.

Their feeding technique has earned them the name of “shredders”. The adults are also large, and the abdomen, leg joints, and several thorax joints are a bright orange color. Two pairs of large wings, kept flat against the body when at rest, are nearly as long as the body. The nymphs live three to four years in the water before emergence. Immediately prior to emerging, the nymphs congregate near the shoreline in shallow water on partially exposed rocks. To emerge, the nymphs crawl from the water to rocks or the shore, and split the nymphal exoskeleton. The adults emerge from the exuviae ready to mate. “When it rains the salmon fly crawls under the rocks so fisherman look for the sun to be out because the flies are more active and when the salmon flies are active the trout are active particularly the bigger trout”, said Persico. How long the hatch will be on Rock Creek is anyone’s guess but Persico says they should be around as the flies move up the creek for about four weeks.

Floating or bank fishing are probably the most popular ways to fish this time of the year on Rock Creek. In recent years the river flow has been high but with limited spring run-off the flow now on Rock Creek isideal for floating. “There are always areas of the river that floaters need to be aware of the hazards while floating so please call (406-825-6440)-or stop into the store on your way to fishing, because we have the current river conditions on a daily basis”, said Persico.