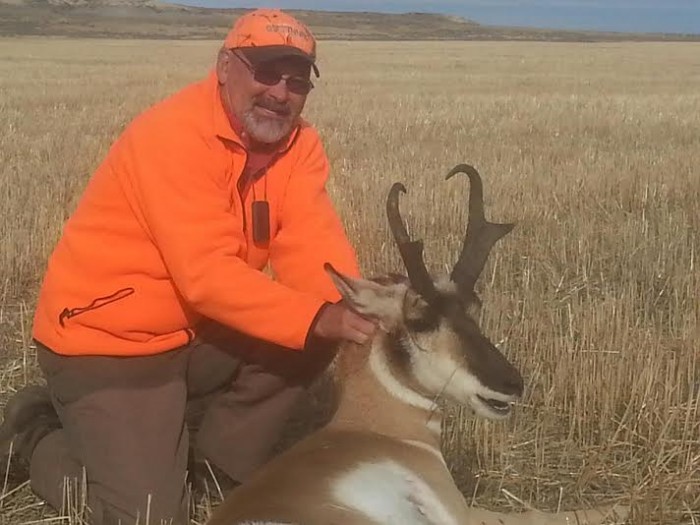 The hunting season in Montana is now in full swing with the opening of the deer and elk rifle season last Saturday. Most of the hunting seasons that we look forward to are now open including waterfowl, upland bird, antelope, pheasant, and now deer and elk. It appears to me that hunters are having some success.

I am sure everybody knows someone that was successful this past weekend. Devin Huntley from Missoula sent me a picture of a nice mule deer he shot on Sunday. This is what Huntley had to say about his hunting experience, “I saw him from about a mile away while on the way back to my truck.  Did a big end-around sneak and Came up over him (where he had been) while he was feeding.  I got a nice rest on a big pile of rocks and shot him at 362 yards. I was by myself so it’s going to be a long afternoon. What a great hunt though!!! Then there was Todd Harrison a friend of mine from Lolo calling me while I worked in my office on Monday suggesting I come out and take a look at his bull elk. “I was high on a ridge when I heard the cow elk chirping right below me so I set up hoping to see one of the two bulls that were bugling when through a window between two trees a nice 6 point stood about 200 yards away” that’s the way Harrison described his hunting experience to me as I admired the elk horns in the bed of his truck. He shot it at 10am on Sunday and it took Harrison and a buddy till 2 in the afternoon Monday to pack his elk out.

The rest of the state saw increased hunter activity as well as success rate on both deer and elk.  Throughout south central Montana, the number of hunters who stopped at Montana Fish, Wildlife and Parks’ four check stations was up and the percentage of hunters with harvested game was up overall. In southwest Montana FWP reported that harvest numbers were up over last year at the check stations operated in Cameron, at the mouth of the Gallatin Canyon, in Divide, in Silver City, and in Mill Creek although some stations saw a decrease in hunter numbers. A check station operated in the area east of Townsend recorded the most hunters of any Region 3 check station with 749. And of those 749 hunters, over 15-percent successfully harvested a deer or an elk. The check stations which monitor the Upper Big Hole – Divide and Mill Creek – checked in 58 elk. 704 hunters came through the Silver City check station.

Area Biologist Jenny Sika reported 5 white-tailed deer, 7 mule deer, and 27 elk taken in surrounding hunting districts leading to a nearly 6-percent harvest success rate – on par with prior years. On the Rocky Mountain Front fewer elk and mule deer were taken compared to the past five years. At the six northwest Montana check stations, a total of 3,210   hunters checked 158 white-tailed deer (102 of these were bucks), 18 mule deer, and 23 elk for a 6.2 percent rate of hunters with big game. The harvest rate was the same as last year. In Western Montana the tallies through the Darby check station were remarkably similar to last year’s counts.  FWP checked 1,050 hunters, 63 elk, 14 white-tailed deer and 10 mule deer.