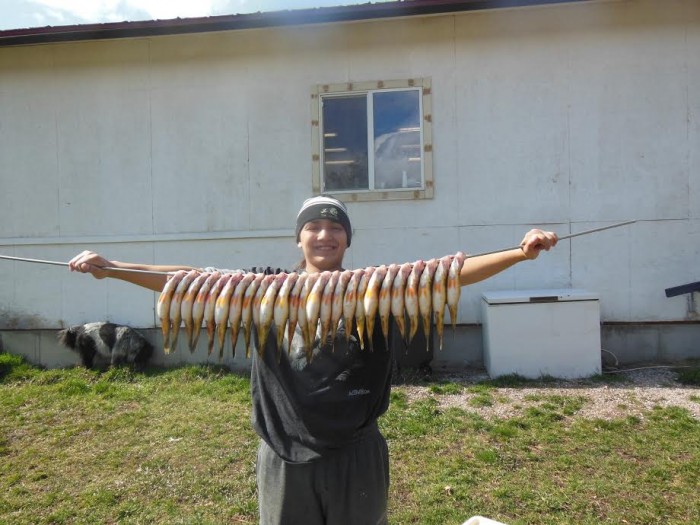 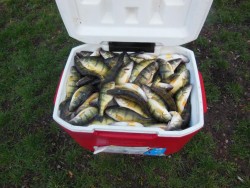 Yesterday, March 20th, being a Sunday we closed the store at 2:00 p.m. My partner Marlon Starblanket and I loaded up and headed for the boat ramp at the Salish Point in Polson. Marlon is best known for his academic prowess at Ronan High School and for his ability to spin yarns of Indian lore. In spite of being smart he’s also able to generally out fish me when we go after perch.

Our goal was to fill a 52 quart cooler with perch on the Far East side of Polson Bay before dark. Once you are on the water it’s not difficult to find the huge school of perch because the large number of people who take advantage of this phenomenon create a small boat city over the fish. My preferred technique to get into the fish is to start up wind of waters that have potential for fish and begin drifting until a bite occurs. Because perch are a schooling fish I anchor at that point and most often I’m into the fish. My first drift was unsuccessful so I began motoring slowly toward the boats trolling a spoon. I mentioned to Marlon that he should look over the bow if possible he could see the fish.

We hadn’t gone very far when he said, “I see them; I see lots of fish.” So much for the drift and find method. I threw in the anchor and Marlon secured it on the bow.

We started with night crawlers for bait but I eventually switched to fairly large pieces of cut perch hoping to entice the larger fish. Not only was that producing larger fish but the need to change bait was less frequent.

I was using a perch fly/flash fly setup while Marlon was using a two-fly setup with a bottom weight. I was fishing blind, casting out away from the boat feeling for strikes while Marlon was sight fishing close to the boat selectively choosing which fish he’d allow to take his bait. In the end I switched and also began sight fishing because both size and numbers seemed to be in his favor. For two hours he’d say “look at that one.” and I’d comment “that’s a beaut”, or “that’s a keeper.” Also things like, “I had two on and the big one got away”, “I had two on and lost the little one,” or, “Look at that! Two big ones at the same time.” If you‘ve been around fishermen you’ll notice that they have a limited vocabulary especially when they are fishing.

By 6:30 the cooler’s full, no room for another fish. The final count was close to 260 fish. If it concerns you that such larger numbers of fish are being taken consider that for the last 3 years more and more pressure has been applied to this fishery and the number and size of these fish has not diminished but if anything increased. Because perch are so cannibalistic thinning the larger fish insures adequate recruitment of the smaller fish and also allows for increased growth rate.

Early that day I received a call from a Missoula area friend, Ross Tate, asking where the nearest place from East Bay was to catch lake trout. I gave him some possibilities and then asked him, “What happened?” Did you already catch enough perch?” He replied, “Yeah! We’ve got all we can handle”. I let it go at that and figured he was headed for the Narrows.

When Marlon and I finally arrived in East Bay I received another call from Ross requesting that I bring him some oil so they could fry some filets on their boat. I replied, I’d be glad to but we are already here and you’re about 50 yards form us”. Then, I asked, “What happened to going Mack Fishing?” He responded, “We were having too much fun and couldn’t leave.” So it is with spring perch fishing on Flathead Lake. You’ll be missing a great experience not to take advantage of this event at least once.
For more information call us at 406-675-0068 or my personal cell 406-250-0241. Our store hours are 8:00 a.m. to 7:00 p.m. Monday through Saturday and 8:00 to 2:00 on Sunday.

For our product line check out our website at: www.zimmertackle.com