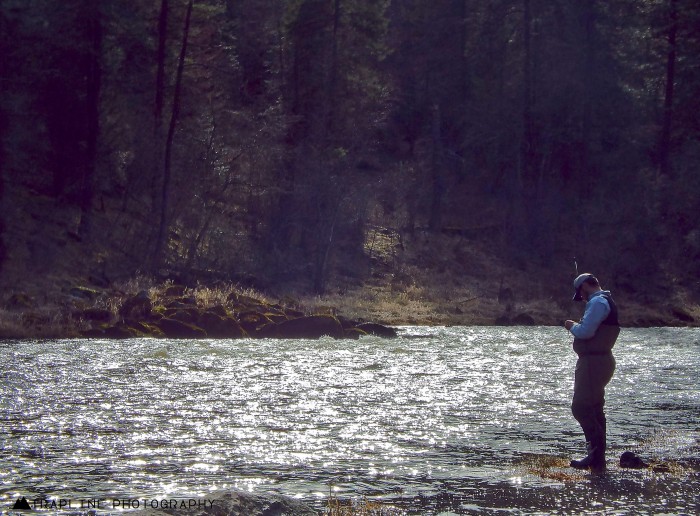 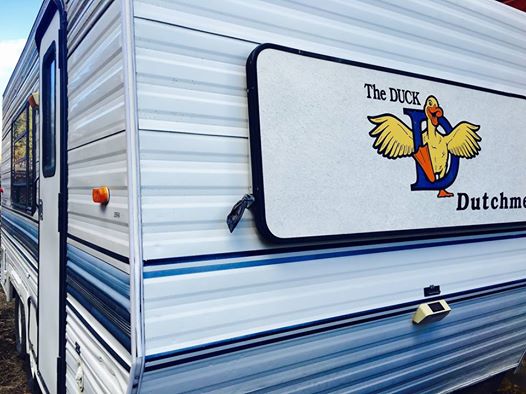 Day 1 (Friday, 3.18.16): Jason Maxwell and I loaded up the truck and the camp trailer.  We were done with work, and it was time to head west to try and land ourselves a steelhead or two.  Joe Michels, from Clinton, rode with us over there, and we were ready to go. Just a couple of stops for propane and our 3-day tags, and we were on our way!  For just a 3 1/2-hour drive, we knew this was going to be a trip well worth it.

We arrived at camp after driving right by once, and we ended up meeting up with Toby Walrath (aka Trigger), Bert Wustner and Toby’s friend, Travis.  They were all on the same mission we were on, but they had been fishing since they arrived earlier that afternoon.  Being that it was already dark when we made it, they were just getting their dinner going around the fire.  We parked the camp trailer and hung out for a while talking about what the next day would bring.  The three we met decided they were leaving by 4:00 a.m. to get to a certain place where the fish would hopefully be plentiful and biting.  It was 10:30 p.m. Idaho time by the time we went to bed after a long drive and an exhausting night.  We were exhausted. 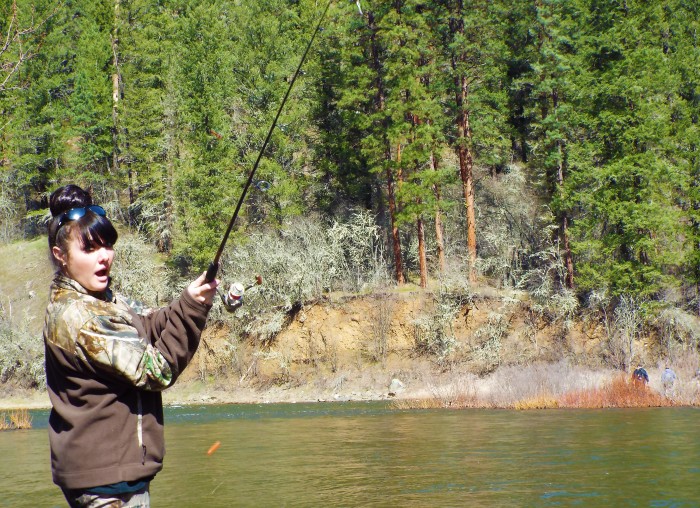 seemed like the middle of the night, well before the butt crack of dawn.  They all loaded up in the truck and headed up the road to what they hoped was the sweet spot.  Jason and I decided to check out the river at camp after Toby said that there were definitely fish down below.  So, we slept in until 9:00 a.m., and made it to the water for some fishing by 10:00.  The water there was clear and shallow enough to see if there were fish there, for the most part. 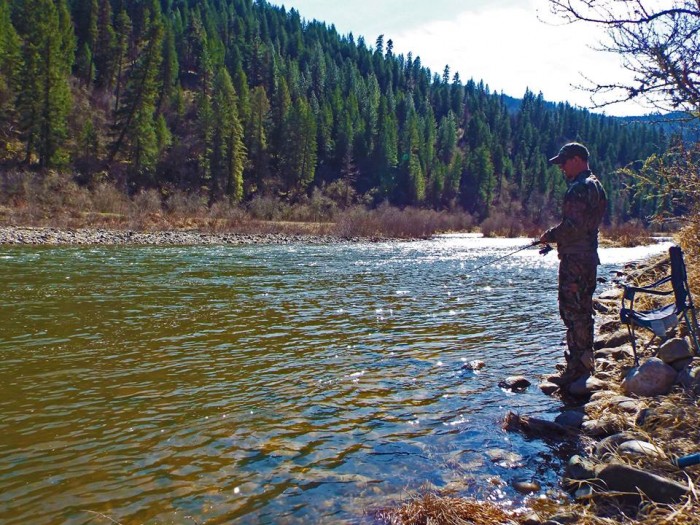 We fished at the river for a while before moving down the road to check out a couple of other spots.  There were hundreds, maybe thousands, of anglers scattered along the river for miles.  We figured we would see at least one person with a fish or reeling one in–but, nothing.  We stopped and talked to Toby on our way by, and Joe had been the only one in their group that caught a steelhead at that point.  But, it was a wild one, so he couldn’t keep it.  Jason and I kept moving, as there were quite a few people down there at that point.

We went up the river a few miles near where we were reeling in the steelies last year, but we had no luck up that far yet, so we headed back down river and decided to try below our camp. 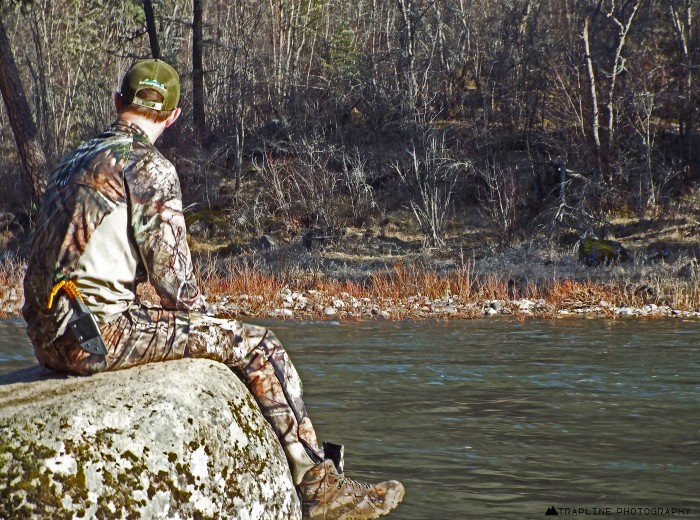 We snagged a lot, which meant we spent a lot of time re-rigging up our sets, so we decided to head back to camp and give that area a try again.

There were a few other anglers below camp, so that was promising…at least, we thought it was.  We took our folding chairs down there, in anticipation of sticking around for some awesome fishing, and we saw and caught nothing–except for a few pictures. 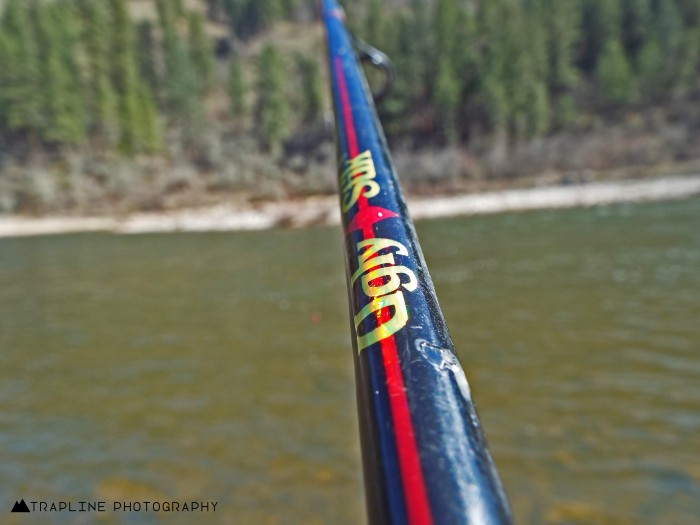 SO…we headed to where Toby, Bert, Travis and Joe were fishing and walked up to their spot (which was also occupied by about four or more other anglers), and Joe had just caught and kept the first steelhead of the day.  The others had been snagging some, but none of them actually hooked any long enough to get them to shore.  That was pretty awesome that Joe caught and brought to shore the first fish of the day (see below). 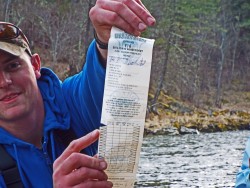 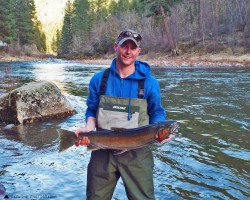 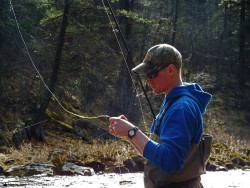 So, Jason made his way past the group and threw his line out a few times and didn’t get a bite.  Meanwhile, Bert and Toby had been getting bites, but, unfortunately, the fish were fighters and they managed to get away.  Travis caught himself a whitefish, and, although it wasn’t a steelhead, he was still pretty happy catching something. 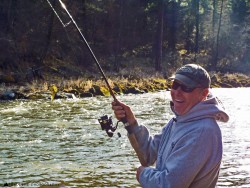 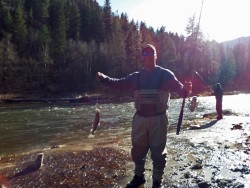 Travis and his whitefish! 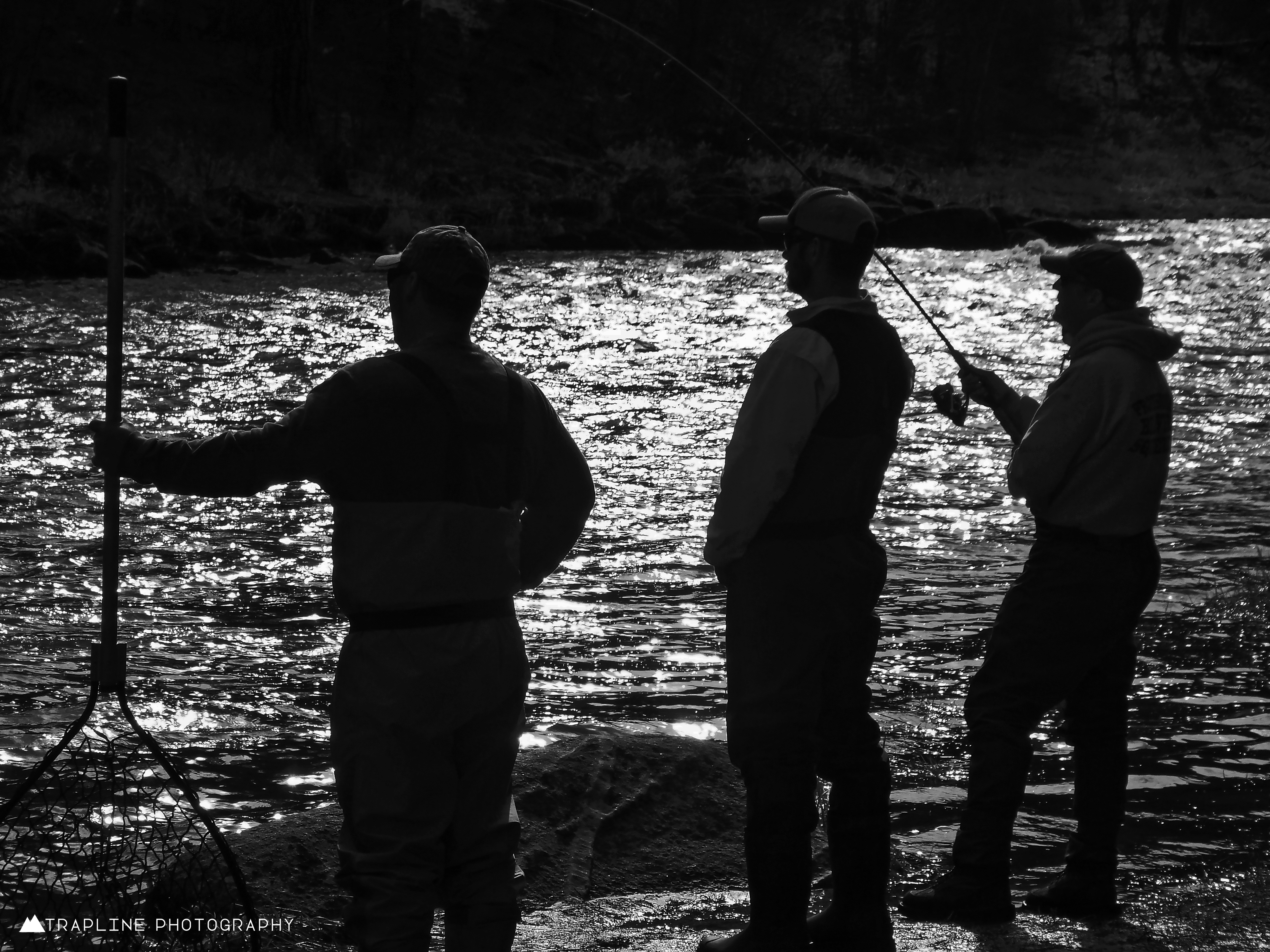 After a couple of more hours, Toby reeled in a steelhead, but he had to release it, as it was a wild one.  Not more than 10 minutes later, he brought in another one–but, this one was a keeper!  He was pretty excited to be able to take some fresh steelhead home to his family.  Plus, it was just about the end of day light, so not too long after, we all headed back to camp.  It was pretty awesome. 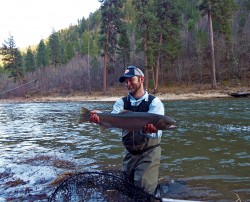 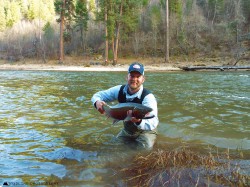 Day 3 (Sunday, 3.20.16): I had to work on Sunday afternoon, so we had to head out by 10:00 a.m., Montana time.  The plan was to get up by about 6:30-7:00 in the morning and fish for a couple of hours before packing p and shipping out.  Unfortunately, it was 9:00 by the time we woke up, so we only had time to get our camp together and take off.  I was kind of bummed, because we were told the fishing was decent just below our camp.  But, we had to get on the road.  Joe also wanted to drop off his steelhead at Tomcat’s, where they smoke them for $18.00 and ship them to you when it’s done.  That is a pretty good deal.  What a cool, little store, and I could spend all day in there checking out the pictures of wolves, mountain lions, bears, various fish, bucks and bulls on the wall.  They also have some phenomenal sheds there.

So, in short, our weekend was a blast.  Jason and I fished, unsuccessfully, but we were successful at having fun.  We may not have gotten after the steelhead during THIS trip, but we will be back in April–and those fish better be ready to get hooked!  Special thanks to Harry Marvin for lending us his gear.   Here are a couple of pictures from last year that we hope to repeat before the season ends this year:

Jason Maxwell with a nice steelhead from the 2015 season 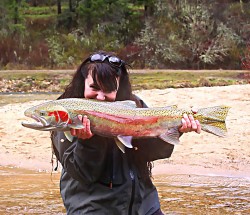 Me with my favorite steelhead….ever….from the 2015 season

Good luck to all the steelheaders out there!  I am hoping sometime soon that somebody will decide to pay me to fish steelhead for a week straight.  I mean, aren’t we all hoping for that?  The one thing there never seems to be enough of is TIME!  Looking forward to April!