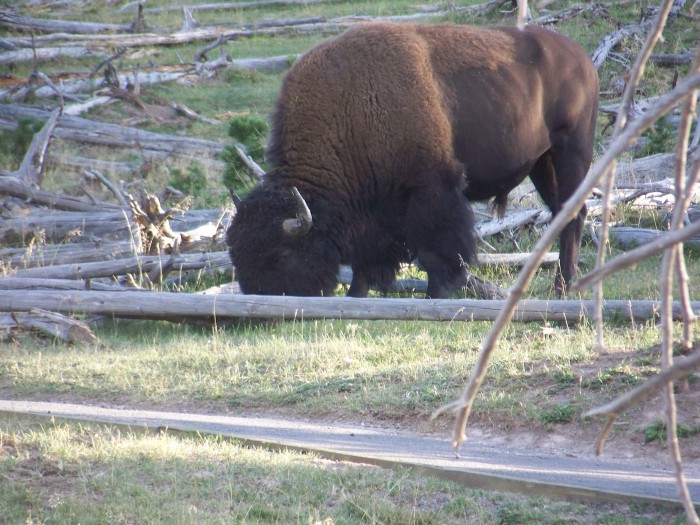 WASHINGTON (April 27, 2016) – The Vote Bison Coalition is proud to celebrate the House and Senate passage of the National Bison Legacy Act, which when signed by the President will officially make bison the National Mammal of the United States.

The bison, North America’s largest land mammal, has an important role in America’s history, culture and economy. Before being nearly wiped from existence by westward expansion, bison roamed across most of North America. The species is acknowledged as the first American conservation success story, having been brought back from the brink of extinction by a concerted effort of ranchers, conservationists, tribes and politicians to save the species in the early 20th century. In 1907, President Teddy Roosevelt and the American Bison Society began this effort by shipping 15 animals by train from the Bronx Zoo to Oklahoma’s Wichita Mountains Wildlife Refuge. Many Native American tribes revere bison as a sacred and spiritual symbol of their heritage and are restoring bison herds on tribal lands throughout the West. Bison now exist in all 50 states in public and private herds, providing recreation opportunities for wildlife viewers in parks, refuges, zoos, and grasslands while sustaining a multimillion dollar sector of American agriculture.

Jim Stone, Executive Director of the Inter Tribal Buffalo Council, said: “The recognition of the buffalo as the National Mammal shows the cross cultural stature of this iconic animal and for tribes will allow us to expand our work on reintroducing buffalo into our day to day lives. The buffalo has had a special place in the lives of tribal people since time immemorial and played important roles in our culture, religion and lifestyle. Now buffalo have become a part of the fabric of tribal life once again, created the foundation for an economic movement based on healthy food choices and provided conservation groups opportunities to expand the habitat for the species.”

Dave Carter, Executive Director of the National Bison Association, said: “The National Mammal declaration not only recognizes the historic role of bison in America, it celebrates the resurgence of bison as an important part of the American environment, diet, and an emerging part of the agricultural economy.”

Keith Aune, WCS Senior Conservationist and Bison Program Coordinator, said: “Finally we are placing this symbolic creature in proper perspective by recognizing its many values to the American people both past and present. The passage of this bill not only recognizes the historic significance of bison but signals the beginning of a grand American adventure to carry out ecological, economic and cultural restoration of American bison into the future. The National Bison Legacy Act assures that bison stories will be shared each year to inspire future generations.  The American bison truly stands out among all North American mammals and deserves to be our National Mammal.”

For the past four years, the Vote Bison Coalition has joined people across the country to celebrate National Bison Day on the first Saturday of November. Native American tribes, bison producers, conservationists, sportsmen and women, educators and other public and private partners commemorated the day by hosting events celebrating bison in their communities in dozens of states and participating on social media. The U.S. Senate has for the past three years recognized National Bison Day with an official resolution.

About the American Bison, a National Icon

The bison, North America’s largest land mammal, once roamed the continent freely, helping sustain plains and prairie ecosystems as a keystone species through foraging, fertilization, trampling and other activities. Bison shaped the vegetation and landscape as they fed on and dispersed the seeds of grasses, sedges, and forbs. Several bird species adapted to or co-evolved with types of grasses and vegetation structures that had been, for millennia, grazed by millions of free-ranging bison. WCS today works to support bison recovery in the American west, through the expansion of existing herds and reintroduction of bison to new large landscapes to avoid ecological extinction.

Before being nearly wiped from existence by westward expansion, bison ranged from Alaska to Mexico, from Oregon to New Jersey, and south as far as Georgia. Bison were hunted down to approximately 1,000 at the turn of the 20th century, and were brought back from the brink of extinction by a concerted effort of ranchers, conservationists and politicians to save the species. In 1907, President Teddy Roosevelt and the American Bison Society began this effort by shipping 15 animals by train from the Bronx Zoo to Oklahoma’s Wichita Mountains Wildlife Refuge. Soon after, bison were transferred to South Dakota’s Wind Cave National Park.

This early campaign to spare the last few hundred bison evolved into the first major wildlife recovery in world history. The small population secured in states like South Dakota, Montana, and Oklahoma spawned today’s 2,500 privately ranched herds of bison that provide meat, wool and leather to growing markets. Native Americans are regaining opportunities to re-center their way of life on the buffalo. Zoos, parks, refuges and tribes are working together to increase bison genetic integrity and numbers. While less than 5 percent of bison truly run wild these days, wherever they roam they help recover lost grasslands and biodiversity.

Bison are profiled on U.S. coins, portrayed on two state flags along with several federal and state emblems, and featured on logos of sports teams, businesses and academic institutions nationwide. In addition, bison have been adopted as the state mammal of Wyoming and the state animal of Oklahoma and Kansas. The bison is the nation’s most culturally recognizable mammal and as such deserves recognition through adoption and celebration.

Bison, often called buffalo by Native people, continue to sustain and provide cultural value to Native Americans and Indian Tribes. More than 60 tribes are working to restore bison to over 1,000,000 acres of Indian lands in South Dakota, Oklahoma, New Mexico, Montana, and other states. Today, bison remain integral to the traditions and lifestyles of Native Americans through cultural practices, social ceremonies and religious rituals. Tribes are returning bison to Indian lands in order to regain lost culture, access locally-available and healthy traditional food, expand economic potential for poor reservations, and to right past wrongs against the Native American people related to the intentional decimation of bison herds. Recently, 87 bison were transferred from Elk Island National Park in Canada to the ancestral bison territory of the Blackfeet Nation reservation near Browning, Montana, in a culturally and spiritually meaningful homecoming.

Bison production on private ranches is in its strongest economic condition in more than a decade. The total value of privately owned bison on more than 2,500 bison ranches in the U.S. was estimated to exceed $336 million in 2014. Bison are being raised on American farms and ranches in nearly every state, which create jobs, provide a sustainable and healthy meat source, and contribute to our nation’s food security.

The Vote Bison Coalition, led by steering committee members the Inter Tribal Buffalo Council, National Bison Association and Wildlife Conservation Society, formed in 2012 to make bison the National Mammal and to celebrate National Bison Day annually on the first Saturday of November. The coalition counts more than 60 businesses, tribal groups and organizations who have banded together to support efforts to celebrate bison. Colorado Gov. John Hickenlooper, Chief Earl Old Person of the Blackfeet Nation, and Ted Roosevelt V, great-great grandson of President Roosevelt, serve as the Advisory Council to the coalition.