What did all this mean to the walleye fishing? A much slower bite and if you were going to catch walleyes you had to go deep instead of 10-20 feet depth and trolling at around 1 miles per hour, we were catching walleyes in 25-36 feet of water while trolling .4 miles per hour with bottom bouncers that were trailed by a 3 foot leader with a small smiley blade and a float with a hook that was tipped with minnow. The walleyes that we were catching were small. The biggest one we caught was 17 inches with the one exception of a 32 inch-12 pound walleye (click here). The winds for most of the days we spent fishing were light and variable except for one. 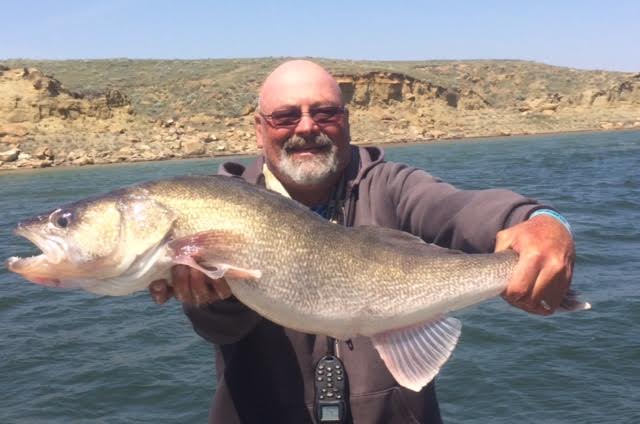 On that day the wind blew out of the south 10-20 miles per hour with gusts to 25 miles per hour. Normally a wind like that would get fish more active on the windswept shorelines and it did. In this case the active fish were northern pike. We caught 8 nice pike in a matter of just a few hours and lost just as many as they broke the line with our tackle in their mouths. The pike were mostly active that day however it was also the day we ended up catching the one large walleye. One of the great things about fishing Fort Peck is from day to day and hour to hour you don’t know what you will hook into like when Downrigger thought he had a snag initially until he felt the snag move.

After a 20 minute fight what we thought was a new state record walleye ended up being a huge catfish that was 34 ½ inches long that weighed 18 pounds (click here). After witnessing that large catfish fight I can’t imagine how long it took the current state catfish record holder to reel his catch in. It was caught in 2013 and also on Fort Peck by an angler that was targeting walleyes just like we did. That catfish weighed over 34.8 pounds and was 41.75 inches long. 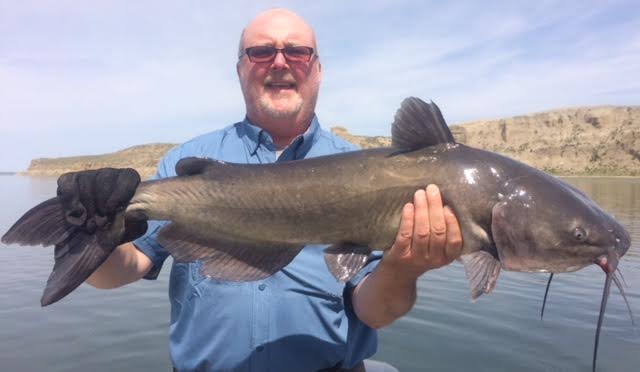 All in all it was a typical week of fishing on Fort Peck for us. In just a few days we were able to land walleye, northern pike, small-mouth bass, perch, and even a huge catfish, all just a short boat ride away from the dock of where we camped at Rock Creek Marina. In fact several folks were landing huge northern pike fishing right off the marina dock. A Fort Peck fishing trip is a must for just about every angler. It’s a lake where when your rod bends down with a fish, you might just have a new state record on the other end of the line.