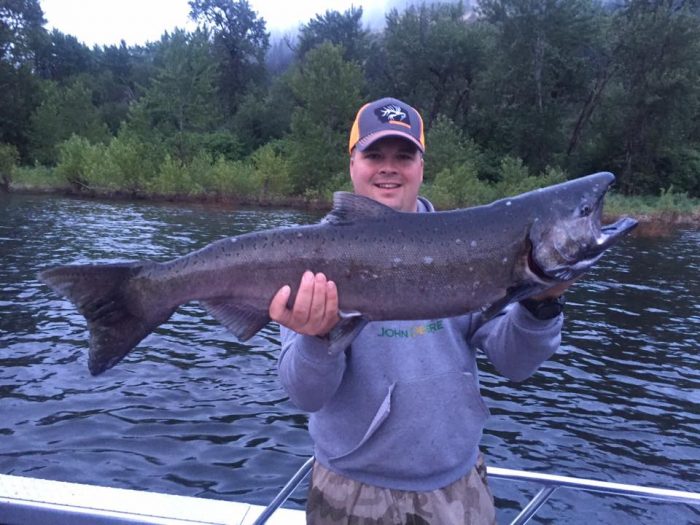 We’ve got two weekends and a full week under our belt.  As expected we’ve seen an increase in effort and harvest after the first weekend (and first weekly report). With fish still moving through the system, I’d expect to see catch and effort increase during the upcoming holiday weekend (but the weather might have an effect on both).

As I mentioned last week, the Pahsimeroi return has been a bit mysterious, as our PIT tag estimate of Pahsimeroi fish crossing Lower Granite Dam was much lower than forecast, but we’ve been seeing good numbers of fish show up at the hatchery. Last week I touched on the idea of doing a genetic analysis of the fish sampled at Lower Granite Dam to get a better idea of how many fish are actually heading to the Pahsimeroi. Thanks to our genetics laboratory in Eagle, we were able to run that analysis of fish that crossed Lower Granite through 6/19, which showed 586 Pahsimeroi adults over the dam – while that’s still not a ton of fish, it’s quite a few more than the 168 estimated through PIT tags. Also, that’s only a count of the fish over lower granite through 6/19, so we know there’s been more and there will continue to be fish heading towards the Pahsimeroi. Ultimately, this combined with the current trapping at the Pahsimeroi (see below) gives us a little more confidence that we’ll be able to meet our broodstock need and continue to provide angling opportunity. And again, big thanks to Matt Campbell and his staff at the Eagle genetics laboratory for turning around the genetic analysis so quickly!

The Sawtooth return is still looking very good with nearly 4,900 fish over Bonneville Dam, and nearly 3,300 of those are over Lower Granite Dam – given our current numbers our harvest share has crept up to nearly 1,100 fish. We continue to see good conversion of Sawtooth fish between Bonneville Dam and Lower Granite Dam, which means our harvest share from the Sawtooth stock could edge up a little higher as mentioned before (~1,200 – 1,300). See below for current trap totals at Sawtooth hatchery.

The Salmon River had good visibility throughout the weekend, flows are relatively low and continue to drop. As of today (6/28), the Salmon River is flowing at 2,330 cfs through the town of Salmon, ID which is 51% of average for today’s date. The Salmon River downstream of the Yankee Fork in location code 19 is flowing at 1,380 cfs, which is 56% of average. Over the weekend, mid-morning water temperatures downstream of Salmon were in the low 60’s, and water temperatures near Stanley were in the low 50’s. Given our current weather and forecast (mid- to high 90’s for the next ~week), river temperatures are likely to rise over the next week – so get out there early and good luck fishing over the holiday weekend!