Good Fishing Reports Are Only Good When the Fish Are Biting: Captain’s Column 7.20.16
By angelamontana

A fishing report that proclaims the fish are biting is only good if the fish are biting when you go fishing. I am sure you have heard, “Should have been here yesterday” or “you’re a day late and a dollar short”. Good fishing reports are only good if the fish are biting when you decide to go fishing. Last Friday I got a text message from Ross Tate from Missoula. Tate had decided to go fish whitefish on Flathead Lake earlier that day. He was joined by Kent Aldredge. They went to the narrows just north of Polson Bay and fished north of the hazard marker. This is the text message I received from Tate late Friday. 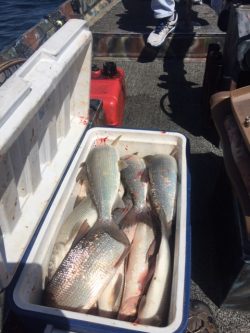 We fished just north of the hazard marker in the narrows in 40-60 feet of water and caught 60 whitefish”, Tate said in a text message. They were using Zimmers Rattle-D-Zastor green lure with a dark green fly above it. “We tipped the fly with a piece of night crawler and that seemed to work”, said Tate. They tipped the 5/8 ounce lure with nothing and caught about 60 percent of their fish off the lure vs the fly that was tipped with a crawler. “We would have caught more but I didn’t bring a big enough cooler.”

The text message was accompanied by a picture that showed a cooler full of whitefish (above) and a short video taken from his phone (see below).

That text message got me excited to head up to Flathead Lake Sunday morning with my girlfriend Berny. I also invited Dick Zimmer to join us. It has been a long time since I have got into a good whitefish bite on Flathead Lake and I was looking forward to the trip. When we arrived at the boat ramp Ross Tate was standing there so I went up to see what he was up to, “I tried to get out to the narrows but once I did the wind and wave action was more than my flat bottom boat could handle so I came back and was thinking about trailing my boat over and trying the Elmo and Big Arm area”, he said.

At that point I thought it would be nice to have THE actual guy who caught all those whitefish two days ago in my boat so I invited Tate along and he accepted. My boat with a deep v was able to handle the waves at the narrows and once we got anchored in  60 foot of water in about the exact spot that Tate was successful a couple of days earlier we were ready to haul in the whitefish. Well we should have been there Friday or even Saturday because I heard reports that anglers were catching whitefish on that day too! Sunday was different.

The dozen or so boats that were fishing the same area that we were caught only one whitefish between all of them. What happened? The young of the year perch that the whitefish had been feeding on must have moved. So we checked out a couple of other spots that we thought the whitefish might be and did not have any luck. Zimmers cell phone was constantly in use with either him calling anglers that were fishing on in other parts of the lake calling him. The whitefish just were not biting and if fish are not biting you can’t make them bite or at least I can’t make them bite. So the next time you hear the fish are biting either from a friend or from the Montana Outdoor Radio Show and you decide to go fishing I have just two words for you. Good Luck!