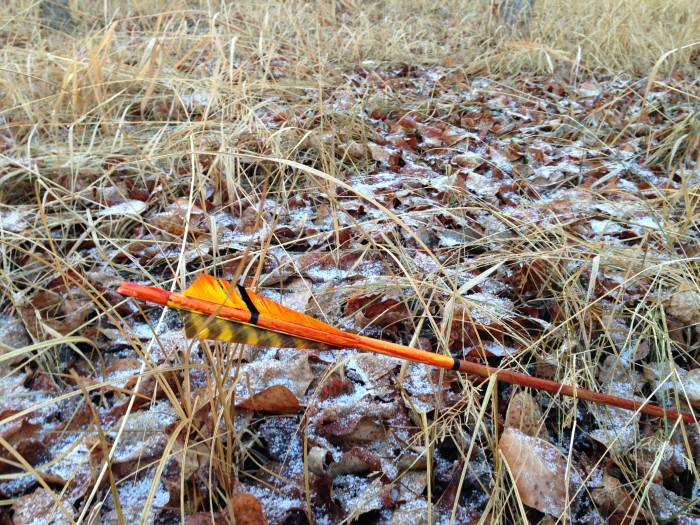 Is Your Hunting Arrow Slow Enough?
By Toby Trigger

Fast bows are great for competitions and getting the arrow to the target quickly but:

“many archers are missing the mark on penetration and arrow performance by focusing solely on arrow speed” says Garrett Schlief, President of the Alaska Bowhunting Company (www.alaskabowhunting.com).

Schlief represents a growing number of hardcore bow hunters who refuse to be dazzled by the claims that arrow speed and kinetic energy are the best measures of arrow choice.  Kinetic energy is calculated by the formula : KE = 1/2mV² {where m = mass, V = velocity} expressed as foot pounds.

If that brings back nightmares from high school physics class, simply put it’s the weight of the arrow multiplied by speed (squared) then divided by the effect of gravity on the arrow as it flies.   In even more simple terms it is potential energy.

Using potential or kinetic energy to determine how well your arrow will penetrate is only part of the penetration formula.  From the time the arrow leaves the bow until it reaches the target much of the potential energy has been used up.   A good example of kinetic energy can be seen by striking a tuning fork.  That produces an extremely high level of kinetic energy but it won’t kill a deer.

So what’ the difference?  Momentum calculates the rate of arrow travel in one direction and eliminates all the energy lost from things like arrow flex, heat energy and sound; all sources of energy loss during arrow flight. In other words, it’s the actual energy delivered upon impact, not the potential energy it had when it left the bow.

The easiest way to improve momentum (which equates to more pass through shots) is by adding weight tubes to get the arrow weight up.   According to the well documented Ashby Report conducted by three decades of shots into actual animals, an arrow weight of 650 grains is the mark for bow hunters to shoot for especially when the arrow connects with heavy bone.

Other details like using tapered shafts and increasing the point weight with a rugged cut on impact broad head help too.  It doesn’t matter how fast or heavy your arrow and broad head are if the energy is lost or the arrow crumples on impact.

Adding weight might slow your arrow down but it will speed your blood trails up.  And like Dr. Ashby said; “no animal has ever been lost because of too much penetration.”