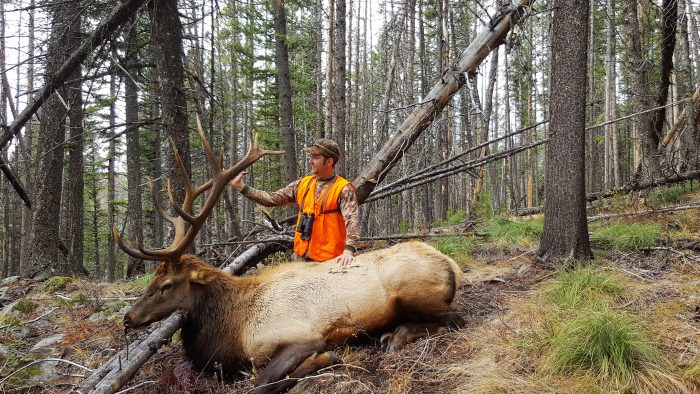 The blowdown folded into layers off the side of the ridge pointing mostly downward towards the creek.  The drop was more than 700 feet and the buck brush pushed defiantly upwards through the tangled mess.  I debated for a few minutes with myself whether the reward was worth it and the overriding answer was yes but I know it’s going to suck.

Five miles from the truck and at two o’clock in the afternoon I changed directions and planned to work slowly along a timbered ridge until the sun dropped below the horizon.  A trail hugged the ridge along its west side a half mile or so as the crow flies but the drainage was basically a nightmare.  That nightmare is why I had this ridge all to myself on opening day.

Walking along the lodge pole balance beams, I stepped from one to another to get across the mess quietly.  Without using the blown down trees to walk across there is no way to make it through without sounding like a wrecking ball.  The snow from the evening before was melting making the logs slick and in an instant I was face down in the logs with a thud.

After several minutes of checking myself and my rifle for damage I crawled down and made my way to the other side of the mess.  I stood there for a few minutes to let the big woods settle happy to be standing on the ground.  Slowly making my way up the easy grade through a classic lodge pole forest I saw the face of an elk about 100 yards above me.

At first I could only see the brow tines and I thought it was a spike bull.  As I raised my scope the left beam told a different story.  I leveled  the cross hairs in an instant using a tree as a solid rest and moments later the bull dropped out of sight.

I would have been happy with any bull especially on public lands in a general season area but the six by seven proved to be my biggest bull to date.  Three hours later the meat was hanging from a pole wrapped in game bags and under a tarp.  I found the trail before dark and was back at my pickup truck by 9:30 pm.  It was a long day but one that I had repeated now for the seventh time in this same area.

A friend of mine has killed multiple bulls with his bow during archery season but if he hasn’t filled his tag before the general season comes he can’t seem to find an elk. I asked him why he thought that was and he said that he wasn’t willing to press through the tangles and brush miles from his vehicle. For him the risk outweighed the reward.

I thought about the many times I have found myself upside down, out of food and water shivering in the snow or worse, in the rain miles from anywhere.  Or the times when my headlamp died before I made it to a trail and the late nights spent driving off the mountain top.  More than a few times I’ve been stuck in snow up to my windows and my first aid kit looks more like a trash can sometimes.  It’s scary.

But then I thought about sitting at home on my couch on opening day.  Or doing something that is safer.  Like what though?  Every thing we do as outdoorsmen and women comes with risk.  Trees stand injuries top the list for bow hunters and anglers drown in rivers every year.  ATV accidents make the news and even lightning strikes or bear attacks seem more common than stories of some lone hunter getting hurt. 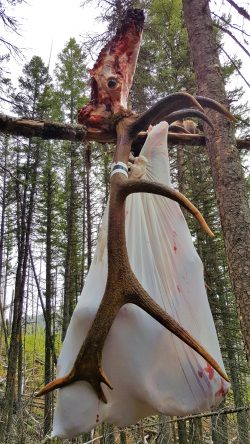 The alternative I guess is to sit home and look out the window wondering what it might be like to push through a tangled mess in the forest and feel the heavy weight of a big bull elk on my shoulders.