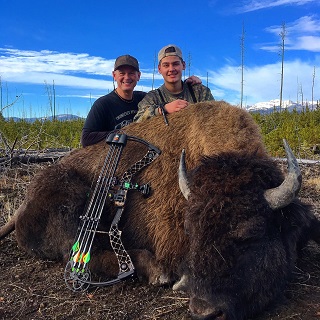 For 16 years Craig raised his son Paul to enjoy the outdoors in the small town of West Yellowstone, Montana.

Craig’s hunting philosophy is to respect every animal taken by gun or bow with ethical shooting born from hours of year-round practice.

That ethical conviction is now apparent in the words and actions of his son Paul who is proud of the 16 big game animals he has taken by way of archery equipment with precise arrow placement.  He attributes his success to dedicated practice and patience before every shot.

Known more for its title as the Snowmobile Capitol of the World than for the 1300 annual residents etching out a life there West Yellowstone sees nearly 4 million visitors each year.  Bison travel through this area too and on heavy snow years are pushed out of Yellowstone National Park in big numbers in late winter.  But a few hold outs can be found living outside the park boundary at any time of the year.

Recently, Craig and Paul scouted for a 2-3 year old bull and were hoping to find one alone and in the timber to make for the conditions Paul would need to make good on a rare opportunity for a wild Bison hunt.

The day before season they located a bull 1000 yards from a road feeding alone and returned the next morning from a different location hoping to find a place to get within striking distance with bow and arrow.  A long sneak put them at 30 yards but it took a 15 minute wait for the bull to offer a clean shot.

Paul’s patience paid off when his arrow met it’s mark:

“After 15 minutes of grazing, He turned broadside to me, exposing a perfect shot for the arrow to be placed. I got in a few yards closer, drew my bow, and as I took a slow exhale, I squeezed the trigger on my release, letting the arrow fly. The arrow hit right behind the shoulder, maybe 8 inches up from his brisket. My first thought was that I shot too low, but I was reassured to remember that a bison’s vitals sit much lower than other big game animals such as deer and elk. The bull kicked a few times, and slowly ran out of the timber, falling over in less that 60 yards. It all happened so fast, I didn’t have time to get full of adrenaline, and neither did the bison.” 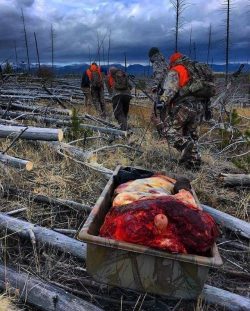 The pack out was long and arduous as one person handled the work of sawing out a trail while others quartered the bull. It took a team effort to pack and slide the meat along the ragged trail back to the road where they could get the meat to  a vehicle.

This bull may be the first buffalo taken by bow unassisted by a rifle hunter.  More work is needed to verify that but either way, this is an incredible accomplishment for a hunter of any age.

But Paul won’t let that fact inflate his ego any as he focusses on the most important part in a story he wrote about his hunt;

“I am humbled by being one of the few that has harvested a bison with a bow and arrow, unassisted by a rifle. Now, may this abundance of meat feed my family and friends for many meals to come.” 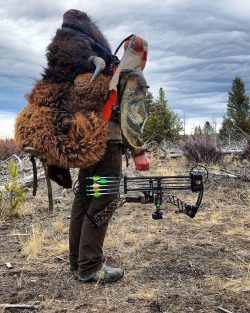 Congratulations to a job well done!

To see more photos from this young man’s adventures, photography, and knifemaking check him out on instagram at  : pbandslay.