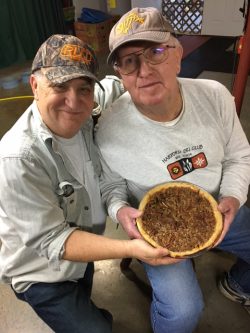 Every hunting camp has a unique way to “Feast”! Traditions vary from meat, seafood, to just great cooking. The one sure thing is, that hunters are always hungry.

This fall I attended a Bow hunting camp in Western Maryland. The members had been inviting me for years, so I finally gave in. One of the great incentives was the seafood feast, that was their annual tradition. The Rut would also be in full force.
Some hunting camps are more modern, clean, or comfortable than others. Once you got past the old and leaky trailers, mouse nests and corpses, bees, bugs, and dirt, this camp was pretty special. The Green Ridge Club has been around for many years and has volumes of stories, memories, and antlers. There are still a few of the original members that cherish their mountain home.

The view is awesome. You can see 3 states from the camp. A huge wooded valley is littered with old and new stands. Each stand has a special name. The Bloody Stand was named for its bleeding builder after he hammered his hand. Some stands are named for their founders. I was stationed at the “Balloon Stand” where a party balloon was found hanging in a tree. 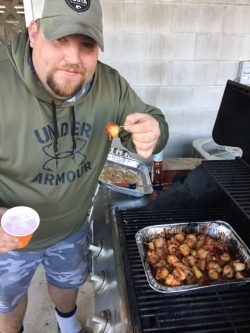 After a long day of hunting, it was time to eat! The Seafood Feast began to take shape. Two of the camp members work for Seafood Wholesalers so the menu included some wonderful treats. Cherrystone clams, mussels, oysters, shrimp, and scallops were what was for dinner. Each camp member had their job and the cooking began to take shape.

Steaming the shellfish was wonderful. The oysters, clams, and mussels were steamed in beer and Old Bay seasoning. A little melted butter for a dipping sauce made them even tastier. The shrimp were huge and a similar bath made them tender and delicious. Some horseradish, lemon, and ketchup formed a nice sauce for the prawns.

There was also a buffet of snacks, and other goodies but the scallops were tough to beat. My job was to roll each scallop in a slice of bacon. One wrap and a quick toothpick would hold them in place. Next, they were placed into a foil pan and slow grilled. As the bacon cooked, it added flavor and grease to the pan. An occasional stir would ensure all were cooked just enough, but not too much.

The Old Bay batch were exceptional! A sprinkle of Old Bay seasoning over the whole pan “kicked them up a notch!” The Barbecue sauce batch had a bottle of sauce poured atop the bacon wrapped babies! At Hunting Camp, simple is always best! I could not pick out which batch was better. They were both the best scallops that this seafood lover has ever had!
Traditional Pecan Pie, using Grandma’s recipe, was the dessert. Of course, beer and other spirits helped to wash everything down.

There were no leftovers. The campfire was surrounded by a bunch of fat men rubbing their full bellies. Morning would come sooner than later, so the hunt would continue. Hopefully the stands would endure the added weight from yet another feast.

We were talking about Hunting Camp weren’t we? Oh yea, we did see some deer too!

Eat and hunt to your fullest!