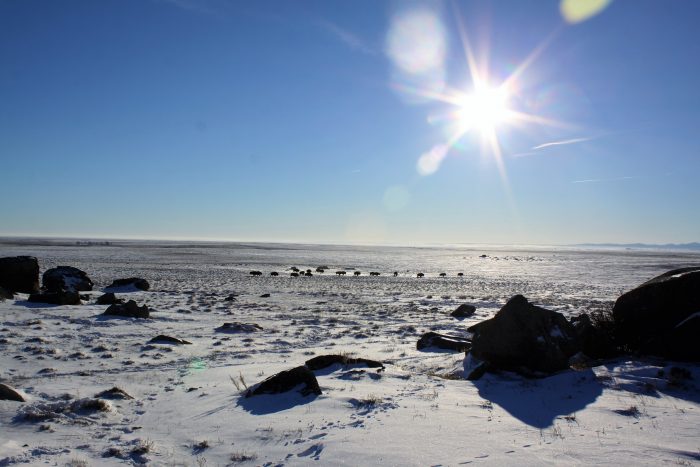 The thermometer showed 20 below zero, which isn’t unusual for the residents at the Fort Belknap Assiniboine Community but it was the first time that my friend Curtis would fire his .54 caliber muzzleloader at that temperature.  The real kicker was that the shot he intended to make was on the largest animal he’d ever hunted for.

The Montana Trappers Association (MTA) is grateful for the Assiniboine Community for donating a bison hunt to raise money for trapper education.  Curtis bought some tickets  last year and his name was drawn at the MTA’s annual Rendezvous which is held in Lewistown each year. 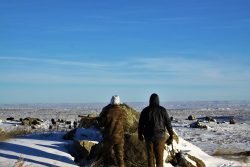 Now we were staring down a group of bulls along with an Assiniboine Bison specialists at Fort Belknap.  Big rock outcroppings allowed us to get to within 120 yards of the group but Curtis wanted to be within 80 yards.  A move to get closer ended quickly when the heard caught sight of him.  The massive animals ran across the open landscape and they kept going for miles. 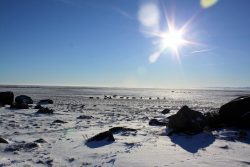 Our native guide kept us moving.  At times we were running through the snow or sneaking behind whatever we could find to sneak closer.  At other times we were bouncing along imaginary roads buried under snow drifts to get in a place where the buffalo would stop.  This hunt was turning out to be tougher than we thought but Curtis was determined to use his muzzleloader for this hunt.

Finally the herd split and the spooky buffalo seemed to keep running across the wide open Montana landscape until they were dots in the distance.  The remaining group stared us down as Curtis got into position to shoot.  With a puff of smoke the buffalo was down and the .54 cal proved itself to be effective for the job.

Congratulations to Curtis for winning the MTA’s Buffalo Hunt For Education and for making good on the opportunity! 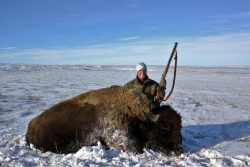 For more information about your chance to enter for this great Montana Hunt Opportunity visit www.montanatrappers.org