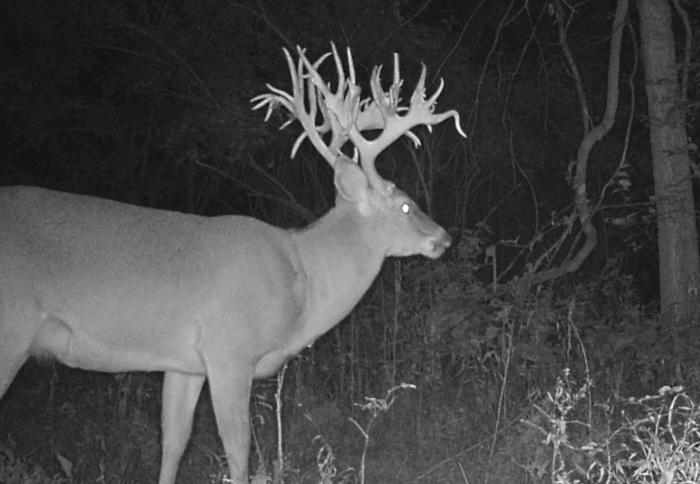 Three days before bow season opened, Stephen Tucker spotted this beast in his corn field. His uncle called to him, “Look at this big buck deer. There’s a big buck up there.” When Tucker saw the buck, he knew he had to get some pictures. This was only the beginning of his hunt.

Tucker got pictures, and his wife and brother-in-law were amazed at what they saw. The deer spent his days on Tucker’s family farm in the city limits of Gallatin. Hunters near by also searched for the buck. But Tucker waited until November, not wanting to pressure the buck.

The first day he spent in the blind was Saturday, November 5th. That morning, the first buck he saw was the one he’d come for. “He came out of the drain and headed toward his scrape. He actually went to his scrape.” said Tucker

Tucker set up the shot around 30-35 yards with his muzzle loader, but he had a misfire. The buck did not care as much as Tucker did, as it just kept working it’s scrape. Tucker doesn’t know what happened when it came to the misfire, but he had to move on if he was gonna get this buck. Tucker couldn’t get himself together to get another cap on. By the time he could’ve gotten another shot off, the whitetail had gone out of sight.

That afternoon he came back to check out the does that were in front of Tucker. He scoped him with the rangefinder, and saw he was 162 yards away. Tucker thought about shooting the buck, but decided with a muzzleloader it was too risky. He passed on the buck and revisited the blind Sunday morning. But the buck did not appear. Several does came in a acted spooked. Tucker decided to give it a rest for the afternoon. The next morning he headed out again.

“It was still dark. So dark I couldn’t see.” Tucker said. About 15 minutes in 2 dear walked in front of the blind. Tucker couldn’t tell how close they were, but guesses 20-30 yards. He noticed one of the was big, could this be his buck?

30 minutes later he heard something to his right. He pulled back the blind window, but nothing was there. He then methodically closed the window and spun around to look out the other window. The buck stood in front of him, 40 yards seperating them.

“I’m not gonna mess it up this time!” Tucker said to himself as he raised his gun to shoot.

The buck looked straight at Tucker, but the mesh protected Tucker from being discovered. The buck began to walk again, and so Tucker shouldered his gun.

“It was like he turned around and looked me right in the eye.” explains Tucker. The buck stood broadside, giving Tucker the perfect shot. Tucker’s heart rushed as he tried to pull himself together, a feeling many hunters can relate to. Tucker squeezed the trigger, the smoke filling up his blind. As the smoke cleared Tucker saw him running off into the woods.

Tucker waited about an hour, calling family to help him search. Tucker says the buck’s tail was up when he ran away, so he must’ve made a good hit. He couldn’t find any blood where he shot him. Tucker began to get frustrated, as they only found a little bit of hair. They went about 30 yards into the forest. About 40-50 yards the blood trail started to pick up. They walked about 10-20 more yards, and there he was.

“It was just complete up and down. We couldn’t find the blood.” Tucker says. His family said he started crying, and he admits he got a little watery eyed. I mean I’ll admit I’d get a tear in my eye too. The buck green-scored 308 3/8 net. The world record for a non-typical whitetail is 307 5/8

“I don’t know. It’s just a feeling you don’t get from something else.” said Tucker. Well said Mr. Tucker, well said.

Below is a complete interview with the man who took down the deer, Stephen Tucker.

Article discovered on Field and Stream