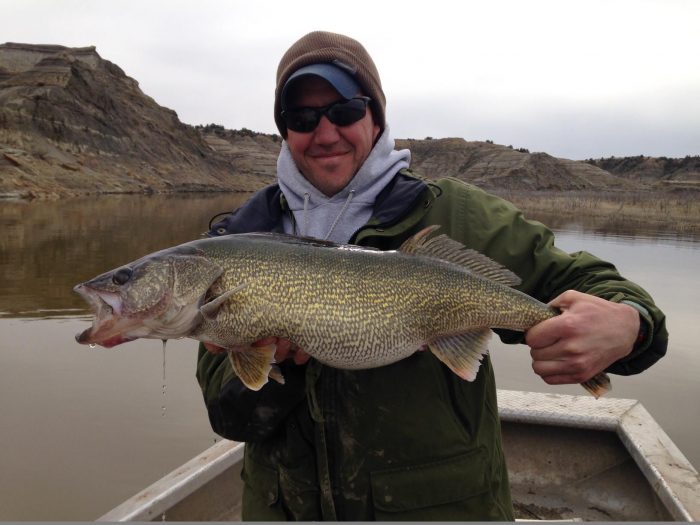 Again, it’s been a windy past few days in the Big Dry Arm of Fort Peck Reservoir. We were unable to check our nets on Friday due to the 40 mph gusts that swept through the area. In addition, the wind has caused a few of the trap nets to roll. This causes a twist in the lead line that runs to shore and intercepts fish as they cruise in the shallow water. As you could imagine, this has allowed some of the fish to bypass the trap nets resulting in a decrease in catch rates.

Water surface temperatures were hovering around 52 degrees this weekend, but dropped back down to 48 degrees as of today due to the wind and cooler temperatures mixing the water. There still seems to be an equal portion of ripe to green female walleye being captured throughout our trap netting locations. However, trap net catches of ripe female walleye have been better in the warmer, shallower areas indicating they are searching for more favorable temperatures for spawning.

We’ve managed to hold three more smaller egg-takes since the last update due to the slow and steady collection of ripe female walleye. These smaller egg-takes should bring the total to 44 million eggs so far. It looks like we could see a slight warming trend headed this direction, so stay tuned for more updates on egg-take numbers.