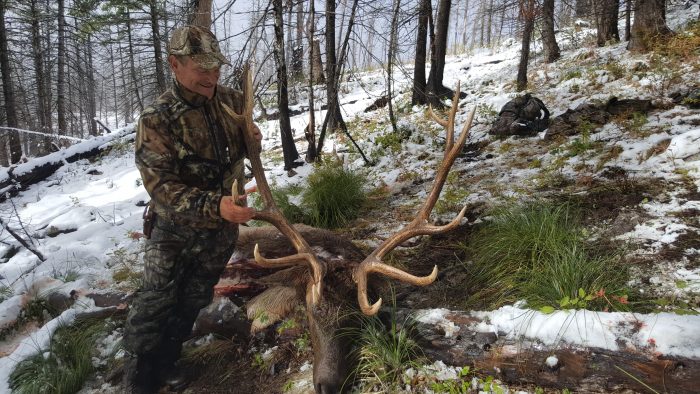 When Gregg Kabacinski was a young boy his grandfather wanted to take him hunting but only had one gun so he bought a .308 and handed it to Gregg.  That old rifle has been carried by Kabacinski, now 65, on more hunts than he can recall.

“I’ve always wanted to do a backcountry hunt for elk and finally I decided to just do it.” Gregg said.  Gregg chose to hunt in the Frank Church Wilderness of No Return during the elk rut where he could carry the sentimental rifle more to satisfy his desire to hunt elk with the rifle and to test his physical abilities than to kill an elk.

He shared camp with two friends Marty and Mike who hunted together.  Gregg hunted with me and the story unfolded in harsh winter like conditions that felt more like November than mid September. 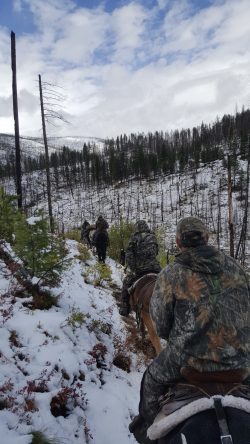 After five days of grueling effort a thunderstorm that carried snow with it high in the mountains blew in as I did my best to coax elk into range with cow calls and short bugles.

The first bugle was so faint and muffled I couldn’t be sure that it was a bugle.  The second, third and subsequent bugles were unmistakable though as the big 6 x 7 bull emerged out of the snow and thunder to announce his dominance while pushing a single cow ahead of him.

At just 43 yards that old .308 sounded off bringing Greggs dream of a wilderness elk hunt with his grandpa’s rifle to reality.

“This whole hunt has been like a fairy tale” Gregg said of his hunt with Bitterroot Outfitters.